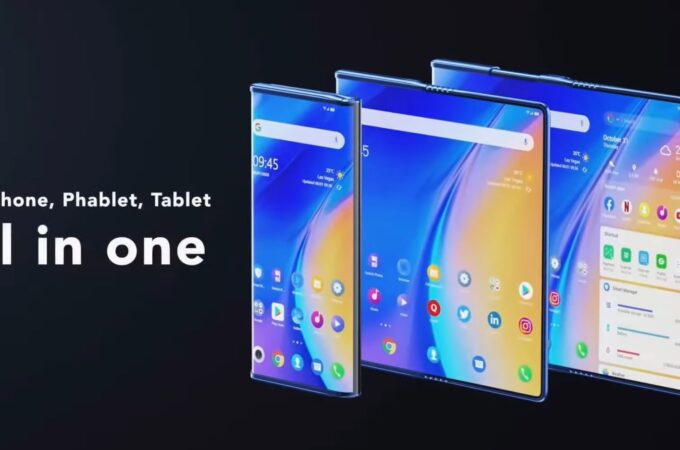 TCL held some events this week, unveiling a bunch of TVs, headphones and smartphones, but the product that stole the show was definitely the TCL Fold ‘n Roll. It’s a concept phone and also a premiere: the very first foldable phone that’s also a rollable phone. You can see it in action below.

It’s in prototype phase right now, much like TCL’s other foldables, which also include a dual hinge machine. The device opts for an outward folding panel, much like the Huawei Mate XS, leaving the screen on the outside. It also gets a rollable mechanism, that expands the screen to an even larger diagonal. In regular phone mode it has a 6.87 inch diagonal, which becomes 8.85 inches when unfolded. If you trigger the rollable mechanism, the diagonal goes to 10 inches. This also changes the aspect ratio, which becomes wider.

TCL is actually very close to the product, as they’re the parent company of CSOT, a big display maker from Chin that also made the panels here. The prototype uses plastic for protection, but TCL is researching an improved way of protecting the panel from scratches. If you look closely, in the video below you can spot a stylus nested in the bottom right area. We also see a triple back camera and no selfie shooter, as the back cam also does selfies.

TCL is still promising to release a commercial foldable device this year, but this format remains proof of concept for a while now. Only two other rollables have been uncovered so far: LG Rollable and Oppo X 2021. Both are still works in progress and LG’s is most likely canned, as LG Mobile folded recently.

About Kelvin
Passionate about design, especially smartphones, gadgets and tablets. Blogging on this site since 2008 and discovering prototypes and trends before bigshot companies sometimes
BlackBerry Key 3 5G Gets a Brand New Shot, In This Concept   Samsung Galaxy S22 Gets an Olympus Camera In This Render