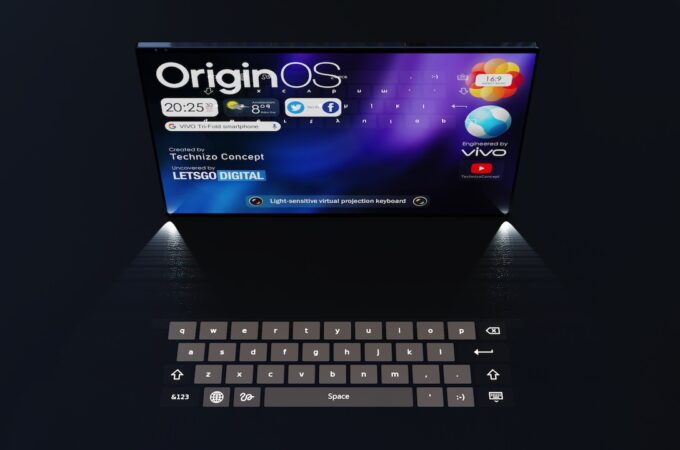 The idea of a tri fold foldable phone has been floated around ever since the very first Xiaomi foldable leaked two years ago, with its two side “wings”, each folding at the front or back of a main screen. In the mean time we’ve seen tablets turning into accordions to make a beefy phone and other contraptions. The dream of a tri fold phone is now one step closer to being realized, courtesy of a brand new Vivo patent.

As usual Letsgodigital is on the case, taking over the patents and documents and turning them into beautifully detailed renders. It’s only a concept of course and quite a bold one, I have to say. The patent shows a large foldable device with a 16:9 display and a virtual keyboard projected by side projectors. The device is focused on productivity and the large screen (projected one) will let you do more work, play on larger diagonals and watch movies.

The patent was already filed with the USPTO (United States Patent and Trademark Office) and includes 9 pages of documents. It was also published in the WIPO (World Intellectual Property Office) database. At its core sits sort of a tablet, that’s able to fold into a smartphone. Once folded, the device turns into a “Z” shaped machine. The virtual keyboard is based on light rays (maybe lasers would be more useful) and a signal received detects the surface where the keyboard shows up.

We’ve heard through the grapevine that the tri fold phone may end up a NEX model, rather than a typical vivo Fold. By the way, we’ve seen Samsung and TCL demo such tri foldables for years now, but without concrete proof of a real working machine.

We also have a video of the Vivo Tri Fold Phone below, courtesy of Technizo Concept:

About Kelvin
Passionate about design, especially smartphones, gadgets and tablets. Blogging on this site since 2008 and discovering prototypes and trends before bigshot companies sometimes
What’s the Appeal of Running a VPN on Your Android Phone   Samsung Galaxy A73 Gets a New Leak: Renders, Price, Specs