This is not exactly the Nokia N10 that everyone is expecting, but it’s still something that may become real: a Nokia Jolla Sailfish OS handset, created by Sanjaya Kanishka. As you know already, Jolla is a Finnish startup made out of people who left Nokia and wanted a new direction. This direction involves Sailfish OS, a platform based on swiping that may remind you of MeeGo. 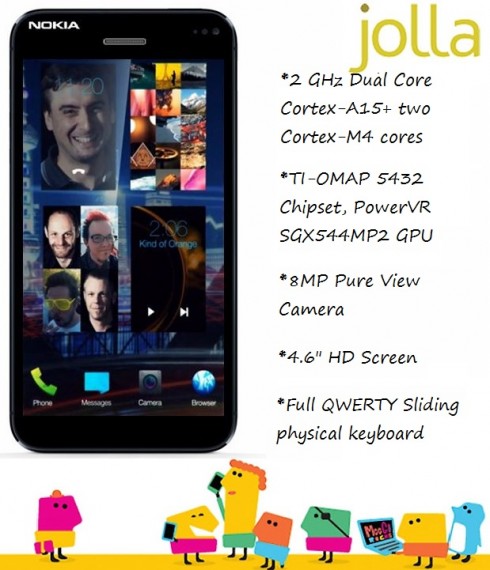 Back to the concept you see here, the Nokia Jolla phone features a 4.6 inch True HD IPS+ screen, with a 768 x 1280 pixel resolution and 332 ppi pixel density. The same screen uses PureMotion HD+ ClearBlack technology and Corning Gorilla Glass 2. Other specs include a dual core Cortex A15 processor, a TI OMAP 5432 chipset with a PowerVR SGX544MP2 GPU. The device also features a 4 row sliding physical QWERTY keyboard, 2 GB of RAM, 16 GB of storage and a microSD card slot.

At the back we’re got an 8 megapixel camera with both Carl Zeiss technology and PureView technology, as well as Xenon flash. The cam offers 1080p 60 fps video capture and optical image stabilization. Other technologies on board of the Jolla Sailfish OS phone include LTE, HSUPA+, Bluetooth 4.0, NFC and Dolby technology. Finally, powering up the gizmo is 2700 mAh Li-Ion battery. The facade of the smartphone looks really appealing, while the keyboard seems comfy.

Is it just me or does Sailfish OS look a bit like MeeGo and BlackBerry 10 OS?