Nokia Lumia 8 aka Nokia L8 is a concept Windows Phone 8 device created by Saeid Khajevand and pictured below. He imagined a handset that runs WP8, has a 41 megapixel PureView camera, what looks like a potent speaker at the front bottom and pretty much the same design as current hot Lumias. 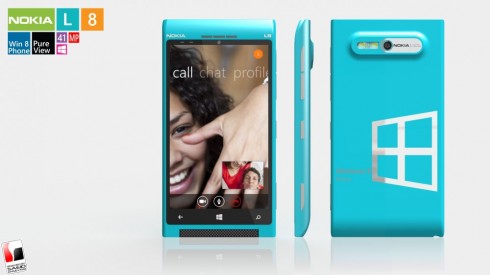 You can see that the upper side is a bit more sloped than what we have right now and the device is a bit less rounded. All the major buttons are on one side, the right side, including On/Off, volume and camera, while the camera mechanism at the back seems way too compact to offer PureView 41 MP action. What’s more interesting is that Windows Phone 8 silver logo that extends from the back and acts like a kickstand, a cool one actually. Also it seems that we’ve got the microUSB port at the bottom, together with yet another speaker, divided into smaller pieces.

What I want from a futuristic Lumia phone is first of all to get rid of all that bulkiness and weight. As you probably know already, the Nokia Lumia 820 and 920 are quite thick and heavy, actually much thicker than current Android hotshots, for example. While Nokia may justify that through big batteries and camera sensors, the future will make even those thinner, so maybe the next Lumia flagship will go below 9 mm or even 8 mm this time, something that HTC and Motorola have been doing for a while now… Do you fancy the Nokia L8?