Created by Keanu Reeves (Mooz Deviant), the Nokia Lumia 999 concept phone is a design based on the Lumia 920 and 928. However, this mockup is original and involves minor look changes, that are shown in the pictures below. 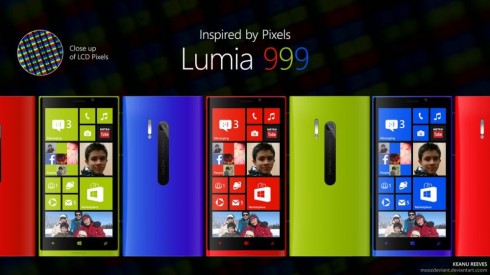 We’re dealing with a totally rectangular handset, that doesn’t feel as rounded as the Lumia 920 for example. The Nokia Lumia 999 features a 5 inch Full HD display, a 13 megapixel Pureview camera at the back and 32 or 64 GB of storage. The color versions of the smartphone are very vivid and they include lime, indigo and cherry as color choices.

At the back of this Nokia Lumia concept we seem to get a Xenon flash, while the screen upfront has a pixel density of 441 ppi, the same as the Xperia Z and Samsung Galaxy S4. I like the lime version a lot. What’s your favourite color version here? Also, I’m betting that there’s a quad core Snapdragon CPU inside, running Windows Phone 8.1 Blue. What do you think?