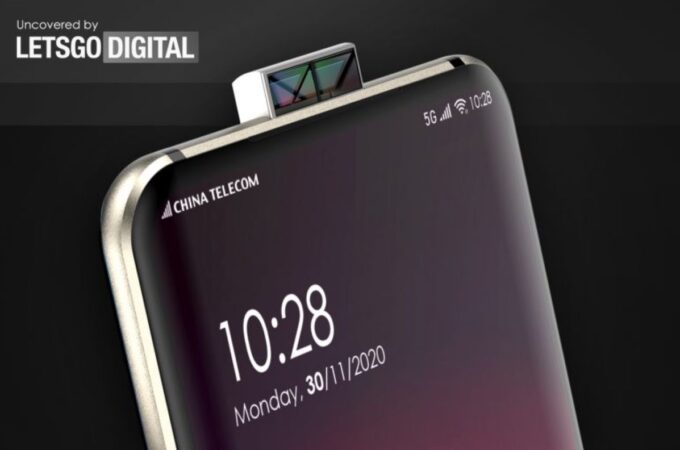 Oppo is pretty much the pioneer and innovator of the moment, seeing how they came up with the first rollable phone, with the first mainstream 65W charging and a few other premieres. They also disputed the title of “first periscope zoom phone” with Huawei. Anyway, now they’re exploring a return to pop up cameras, which has been turned from patent to render by Letsgodigital.

If anyone asks me, the trend of pop up cameras is dead. Galaxy A80 and ZenFone 6 and 7 kept it up, but it’s pretty much a goner. There are rumors about a Galaxy A82 resurrecting it, but I’d bet against it. Oppo may be a daredevil and come up with something original, though. They’re said to be preparing a pop up camera with a mirror. Oppo applied for this patent for a “Photographing module, installation drive assembly and mobile terminal”. The documents were released by WIPO at the end of October 2020.

There’s a “light path deflecting mirror” in the mix, triggering extra photo functions compared to previous projects. The Oppo smartphone shown here has a flat display and a large screen to body ratio. Its frame is pretty beefy and highlighted, but it integrates the pop up bit in a pretty seamless way. Oppo has created a pop up camera system with two sensors and two light path deflection mirrors, shaped like a prism. As long as it reflects light, it can also change the path of the light. The extendable camera system lets you take selfies, but also regular photos and videos.

It’s interesting to see such innovation on the Oppo Reno series, since it was rather associated with the Oppo Find X series before. Remember the Oppo Find X? It made sliding cameras cool, in a pretty seamless manner. Find X2 went with a safer route and Oppo is also exploring a under display camera.

To me this mirror/pop up camera system sounds like overkill and obsession of bezel-less screen must stop.

About Kelvin
Passionate about design, especially smartphones, gadgets and tablets. Blogging on this site since 2008 and discovering prototypes and trends before bigshot companies sometimes
Huawei Mate X2 Switches It Up With a Galaxy Fold-like Design   iPhone 12s Pro With Under Display Touch ID Sensor Gets Rendered