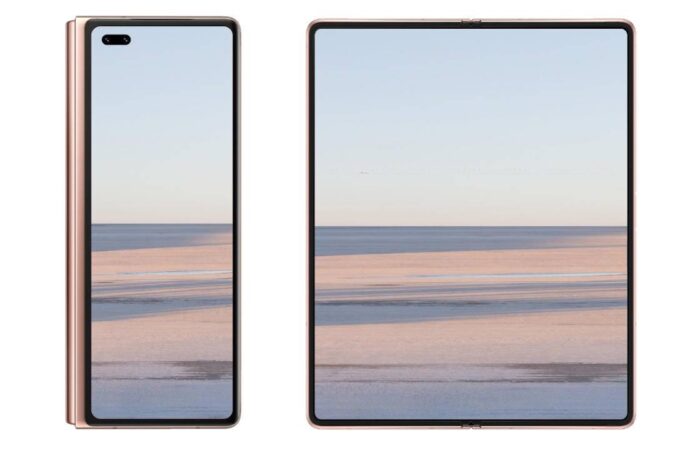 Huawei Mate X2 is the latest phone leak out there, one that reveals a design closer to a Galaxy Fold rather than the Mate X or Mate XS. It seems that Huawei is going with an in folding format this time around, instead of out folding. The device doesn’t have a notch and adopts a pill shaped cutout for the dual selfie camera.

The leak comes straight out of China, fresh after Huawei’s confirmation that the Mate X2 will arrive on February 22nd. The secret has been well kept, with very few leaks so far. We also know for sure that the device will have a Kirin 9000 processor inside. This time a part of the screen isn’t left on the outside and we have two separate screens: an 8 inch one inside and an outer one, probably at 6.5 inches or so. The back of the phone has yet to be revealed.

The bezel around the screen is pretty uniform and small enough for me. The lack of a crease shows us that we’re definitely dealing with just a render, not an actual real image or picture. The leak also claims that the Huawei Mate X2 is thin and lighweight, even compared with other foldables out there. Over the past few hours we learned that its display would be supplied by Samsung and BOE It’s still not clear if we’ll get stylus support, UTG technology or any sort of other cool gimmicks.

A periscope camera would be nice to see, since foldables haven’t received that yet. Sources say that the camera lenses will be supplied by Sunny Optical and O-film tech, with the latter being a camera supplier working with Apple on its new iPads reportedly. For the Mate X2 we expect a $2000 price tag and a new flavour of EMUI or maybe even Harmony OS 2.0.