The Nexus 10 tablet has been in the rumors for a while now and leaks are becoming more and more detailed. Some specs have leaked online and before we get a press picture of the device there are some mockups of the 10 inch Nexus tablet I’d like to show you. They’re made by Deviantart user CapuchinoMedia, who imagined the fresh family of Nexus devices. 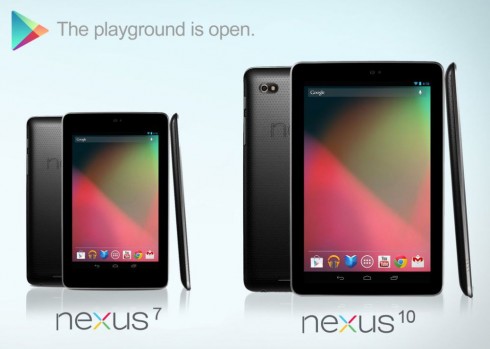 At the bottom we have the LG Nexus 4, the smallest of the gang, then the Nexus 7 and finally the Nexus 10, that seems to adopt the same industrial design as the Nexus 7. From what I’ve heard the new model will be made by Samsung and it may end up looking like the Galaxy Tab 2 10.1 and a bit like the Galaxy Note 10.1. Rumored specs include a dual core Cortex A15 processor, 2 GB of RAM, 16 GB of storage and a crazy good 2560 x 1600 pixel resolution, courtesy of Samsung technology.

At the back there should be a 5 megapixel camera and other usual features include NFC, WiFi, dual speakers at the front and a front facing camera. The OS here will most likely be Android 4.2, just like on the LG Nexus 4. Hopefully the model will be reasonably priced, although that’s pretty hard with such strong hardware. Tomorrow we’ll be back with some leaked pics of the Nexus 10 tablet, but till then you have these mockups. Do you like them?

About Thrystan
Sony Xperia Pad and Pad L Concepts are 5.8 Inch Phablets   Nokia Lumia 940 Concept is Made Entirely of Carbon