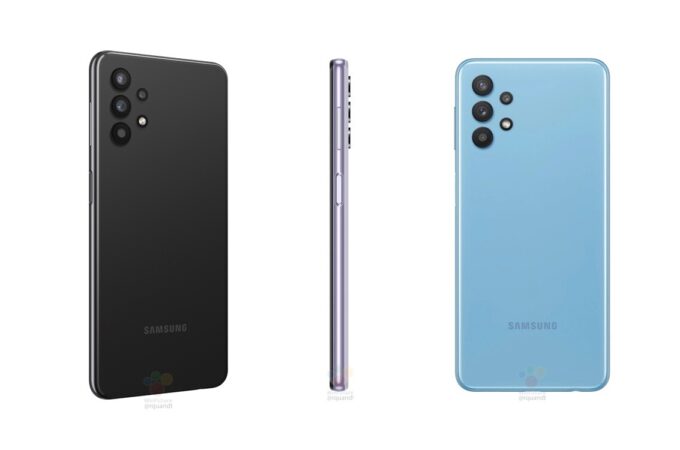 The Holy Grail of smartphone design right now is finding a competent and efficient way of integrating the back camera. Previously the selfie camera was the challenge, but now there’s a new challenge. Right now Samsung seems to be opting for the back cam sensor wrapped around the corner for the S21. But what about the Galaxy A 2021 models?

Samsung Galaxy A32 5G just leaked and it proposes a more elegant solution. It’s also true that upfront it has the old (already) teardrop notch for the selfie cam, but the back side hosts a quad cam setup, sans a protruding module. The lenses are just left on their own, with 3 big cams an 2 smaller dots aligned between them, the Bokeh and LED flash. The smart alignment of the holes in the case will make all OCD guys and gals happy. Symmetry is something that the human being is so passionate about. That’s because it’s so rare.

In some ways this is also not a smart approach, because sans a special module, these cameras are left vulnerable to the inevitable table corner and car door smashes. They’ll also draw lint, cat hair and dirt between the lenses. These renders have surfaced via WinFuture, together with specs, like a 6.5 inch LCD screen, a MediaTek Dimensity 720 CPU, 4 GB of RAM and 64 or 128 GB of storage. There’s also a 48 MP main camera, 2 MP Bokeh camera and probably an ultrawide and Macro one too.

The fingerprint scanner is on the side and we should also get a large battery. A 4G model is also in the cards, with a cheaper price. The back is obviously made of plastic.

About Kelvin
Passionate about design, especially smartphones, gadgets and tablets. Blogging on this site since 2008 and discovering prototypes and trends before bigshot companies sometimes
Xiaomi Mi 11 Pro Gets New Camera (Ben Geskin Render)   Huawei P50 Pro Fresh Renders Are In, Based on Older Leaks