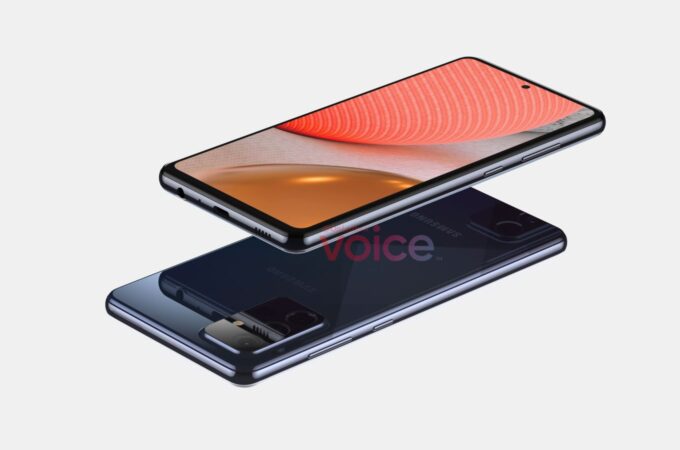 This is the follow-up to the Galaxy A71 5G and the design language is in keeping with the Galaxy Ax2 series so far. We see in the renders a device with pretty large screen bezels, a centered punch hole for the selfie camera and large lenses for the back camera. There’s still plastic at the back, but the frame is made of aluminum. Galaxy A72 5G packs a 6.7 inch flat touchscreen display, which most likely integrates the fingerprint scanner. There are cameras at the back, but the details regarding them are quite scarce.

We expect the main one to be a 64 megapixel shooter and the other three to be an ultrawide one, a Macro one and Bokeh one. It’s likely that the resolutions will increase from the 2020 models. Galaxy A72 5G measures 165 x 77.4 x 8.1 mm, according to @OnLeaks, but the thickness reaches 9.9 with the camera bump. There’s also a 3.5 mm audio jack here and the rumored price point is $599. Samsung Galaxy A72 5G will debut in earl 2021 and the typical triangular pattern of past Galaxy A models is still here.

I can predict there will be a Snapdragon 750G or Snapdragon 765G CPU here, 6 or 8 GB of RAM and a 5000 mAh battery. A jump to 90 Hz screens wouldn’t hurt, but it’s unlikely at this point. Upgrades within the Galaxy A lineup seem incremental at this point from one year to the other.