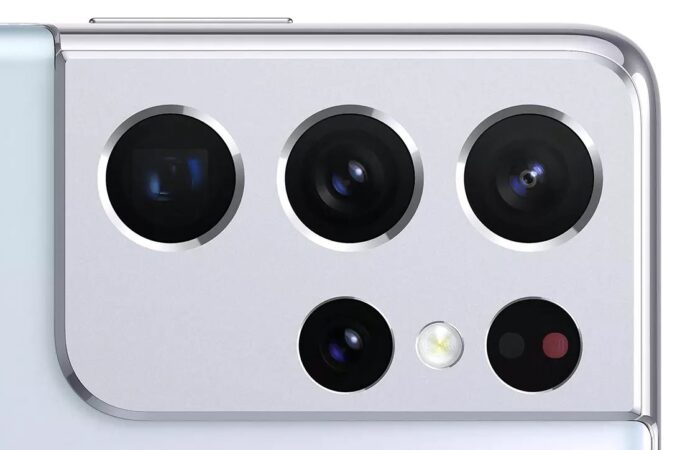 We have seen our share of Samsung Galaxy S21 Ultra renders, but none as detailed and as official looking as those that just leaked via Roland Quandt and Win Future. The release date of the phone is pretty much set in stone for January 14th. We also have a closeup of the Penta Camera module at the back of the phone.

The handset is said to have a smaller diagonal than the predecessor, at 6.8 inches and it should also have less curved edges for the screen. The selfie camera remains cut in the punch hole at the top center side of the panel. Meanwhile, the back camera is wrapped around the left corner of the case and integrates 5 sensors. Two of them are 10 MP telephoto cameras, with 2X and 10X optical zoom (the latter being a periscopic camera), then we have a third gen 108 megapixel camera, a 12 MP ultrawide camera and a laser focus sensor.

The S21 Ultra is made of glass and metal, not plastic like the vanilla S21. We also get a Dynamic AMOLED panel here with 1440p+ resolution, with a 20:9 aspect ratio and 515 ppi density. Samsung will offer 120 Hz refresh rate even at the top resolution, but the screen is very power efficient, as it can go as low as 1 Hz when it’s not displaying complex imagery. Gorilla Glass Victus is on board and we get the promise of 1600 nits of brightness. Inside there’s an Exynos 2100 CPU, which was already teased for a January 12th unveiling and apparently beats the Snapdragon 888 in initial testing.,

At least 8 GB of RAM are here, if not 12 GB and a 5000 mAh battery. The S Pen stylus will work with this device, but we’re not sure if it will be bundled. According to Roland Quandt, the S Pen will be available as a standalone accessory, or part of a bundle, that includes a Silicone or Smart Clear View cover. Also, there’s no charger or headphones in the box this time. Expect a price tag of around 1400 euros in Europe and probably $1400 all over the globe.

About Kelvin
Passionate about design, especially smartphones, gadgets and tablets. Blogging on this site since 2008 and discovering prototypes and trends before bigshot companies sometimes
Nintendo Flex is the Gameboy We NEED   Samsung Galaxy A72 5G Feels Like a Larger A52 5G in Leaked Renders