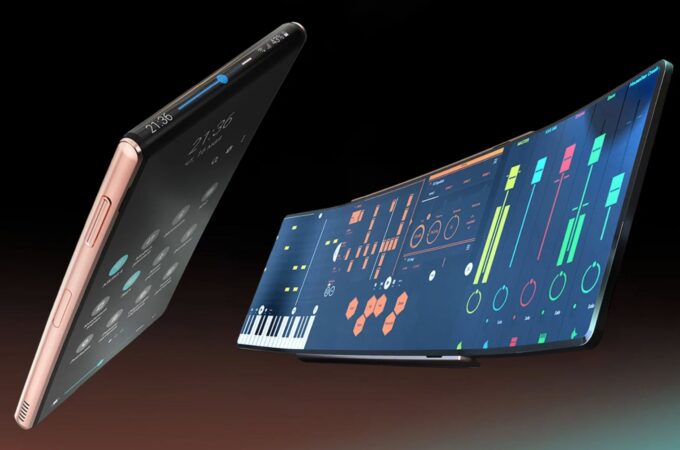 The next big foldable phones that Samsung is preparing are the Galaxy Z Fold 4 and Galaxy Z Flip 4, but some people are dreaming of something different. One of them is designer Alexander Bazilewskiy, who envisioned a Samsung Galaxy Fold Mini concept, with a vertical wraparound screen. It even turns into a tablet.

The designer calls this a “parchment format”. It banks on the very wide display format from the monitors, but now transported into the world of smartphones. Samsung Galaxy Fold Mini adopts a “parchment scroll” format and features a single vertical display, that has two folding points. There’s one on the upper edge and one on the lower edge. It can be expanded vertically by unrolling the top or bottom and this becomes a very long smartphone. If your turn it horizontally you have a widescreen panel, which is great for work and play. Multitasking also happens.

The 3 lenses at the back side can be used in tandem with parts of the screen, to create great selfies. As you can see the edge of the screen works like a notification bar, showing the time, date, weather, notifications and more. The smaller halves of the screen are able to fold backwards to provide a camera interface for selfies. The upper screen works as a viewfinder. The lower part integrates the camera controls. The widescreen display is complemented by a kickstand, allowing you to make the most out of it.

Oddly enough the slides and concepts show us more work and less play. I see some DJ tools and camera UI, but I imagine that games would also be fine on it, maybe even some GeForce NOW action.

About Kelvin
Passionate about design, especially smartphones, gadgets and tablets. Blogging on this site since 2008 and discovering prototypes and trends before bigshot companies sometimes
6 Reasons To Buy a Used iPhone Over New   Word Document Recovery: Recover Unsaved, Deleted, or Lost Word Documents on Mac Easily