We’ve shown your our share of renders and mockups of the Samsung Galaxy S III, but this time we’re dealing a leak of the handset, that’s shown below. This is a frame from an official Samsung presentation at CES 2012, that somehow was missed by people on major blogs last week, when it all went down in Las Vegas. Now everyone is discussing whether or not this is the Samsung Galaxy S III. 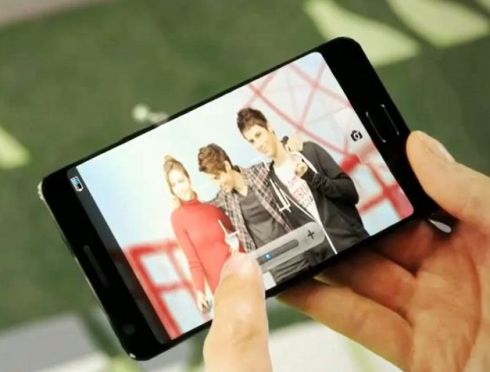 Seeing the size of those fingers next to the device, I’m tempted to believe that this is actually the Galaxy Note, or maybe a follow-up to that device. It’s incredible how small the bezels of this gadget are, especially on the sides, but that may be a case of an image being applied on top of an already existing gadget, without taking into account the bezels. The Home button is also pretty classic for the Galaxy series of devices. I have to remind you that rumors say we should expect a quad core Exynos processor on the Galaxy S III and a 4.6 inch Super AMOLED next gen screen.

There should also be a 12 megapixel camera, TouchWiz 5.0, Android 4.0 Ice Cream Sandwich, LTE, NFC and a powerful battery inside. We’ll see the REAL device at MWC 2012 next month!

About Thrystan
Mobikoma Concept Phone Uses Modules Fastened to Each Other Via Micro Locks   HTC H1, a Bulky Android Phone That Looks Rugged