Recent leaks have shown that Google is preparing more than one Nexus phone for this autumn launch. They may include a LG Nexus 4 device, a HTC Nexus 5, as well as a Samsung Galaxy Nexus II. The latter gets a mockup from Bob Freking, inspired by Holo and Nexus Q and pictured below. 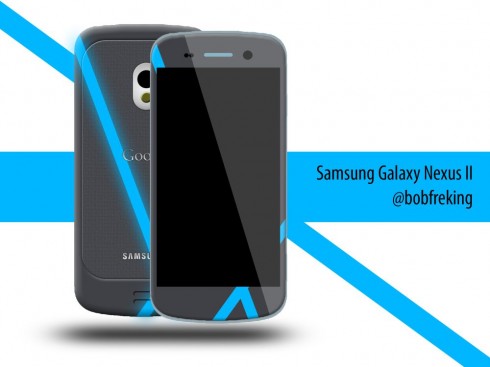 The Galaxy Nexus 2 has the same screen as the Galaxy Note II, a HD AMOLED one, but no longer pentile. Inside there’s an Exynos quad core processor and other features include an 8 megapixel camera, plus there should also be 2 GB of RAM on board and at least 16 GB of storage. As you can see, the device has an elongated design and its back side reminds me of the first Galaxy Nexus.  I guess that the OS on board is Android 4.2 or something like it, according to leaks.

The diagonal size should be more or less the same 4.6 inch affair and when Bob said the screen is the same as the one of the Galaxy Note II, he probably referred to type, not diagonal. I wouldn’t mind seeing a 5 inch Galaxy Nexus II, if the display was integrated in a more compact way. So, what do you think of this concept? Also, on a side note: Google will unveil its Nexus Phones in October 29th, so be ready!