We’ve a few days away from the big debut of IFA 2013, where Samsung, HTC, Sony and ASUS will take the stage to unveil new products. One of the latest devices that leaked today was the Samsung Galaxy Note 12.2, that you can check out below. 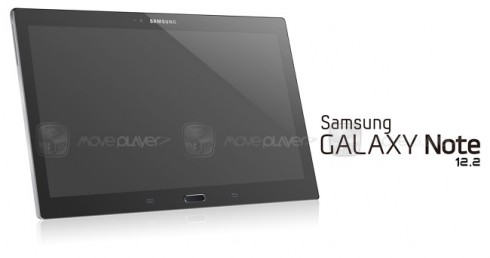 This first press render can be a fake, but it looks pretty real to me. The history of 12 inch tablets started a few months ago, when Apple was rumored to make a Maxi iPad and I recommend you be careful with the name, so you won’t call it a Maxi Pad, that sounds like a tampon. Of course, Samsung likes to retaliate in advance and they’re prepping their own 12 incher.

I’m not sure how a “Note” is fit for the name of a 12.2 inch tablet, but we’ll go with that. To me, this design feels more like Sony than Samsung and they obsess as usual with those awful Home button plus capacitive button combos at the front. Rumored specs include an 8 core CPU, Retina Display resolution and 3 GB of RAM. I think this will fail. How about you?

[via Tablet News and moveplayer]