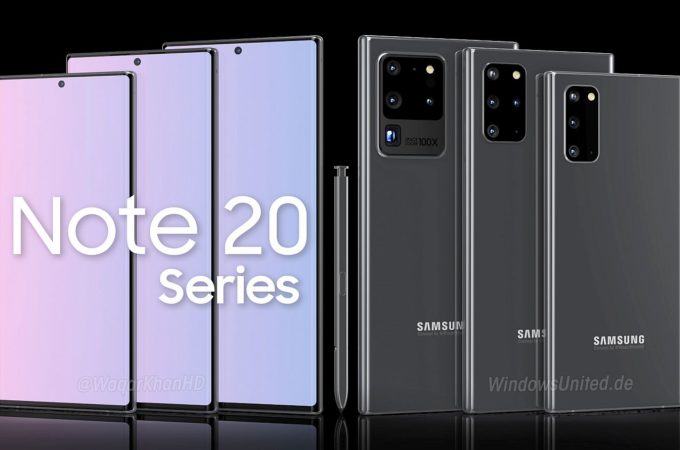 Samsung Galaxy Note 20 rumors starting flying around even before the Galaxy S20 and even more so after its debut. Now we get a series of renders from designer Waqar Khan, who envisioned the upcoming phablet with stylus, which should arrive in August 2020. We even have a video of it below.

Basically the back camera design channels the Galaxy S20 series, even though during the last years, Note models did their own thing, with a different camera design each time. The number of sensors will definitely increase, probably going up to a penta camera setup. I have a feeling that the 108 megapixel camera is here to stay, but I’m not sure the 100x digital zoom will make it, since it could be left as a selling point for the S20 Ultra.

The front camera is still punch hole material and the stylus seems unchanged from the past years. We do get new colors: red, blue, silver, gray, black and the same pink and blue of the S20 cheaper models. I like the matte back approach that we get here. Also, is it just me or does the main camera of the Note 20+ not protrude as much as the S20 Ultra one? Waqar sees the Note 20 as a trio: Note 20, Note 20+ and Note 20 Ultra, even though Samsung isn’t quite the type to make multiple Notes, since it barely got to two last year.

5G will definitely be part of the default package and I expect a 48 MP or 64 MP telephoto camera on both models, plus a generous ultra wide shooter and maybe even a Macro camera to make it Penta. Considering the rumors of the past years related to the stylus, it could be a camera, microphone, Bluetooth headset functionality, joystick features and more. A further expansion of the video editing and vlogging features, plus AR may happen. A brand new 3D ToF sensor tailor made for AR and inspired by the rumored iPad Pro 2020 AR camera could make the cut.