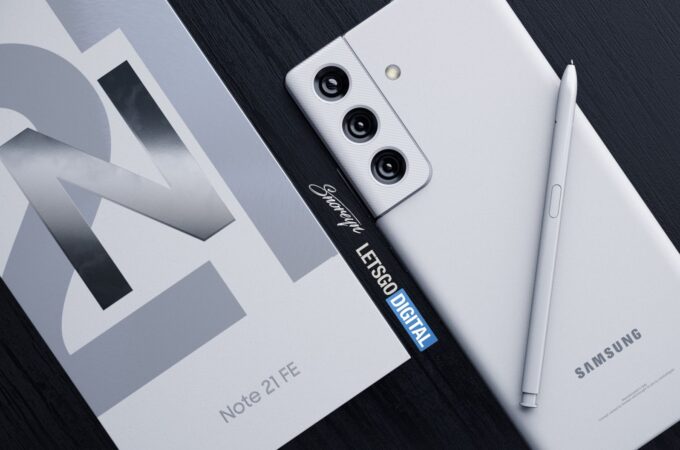 Everybody is speculating that 2021 is the year when Samsung Galaxy Note gets canned. Some say that we may see one last Note before the series goes out. What’s certain is that offering a stylus with the S21 Ultra was a bit of a nail in the coffin of the series. Some folks like those at Letsgodigital are optimistic and even came up with a Samsung Galaxy Note 21 FE concept, shown below.

A collab between designer Snoreyn (Giuseppe Spinelli) and Letsgodigital, the Samsung Galaxy Note 21 FE comes in “snow white” and it was specifically created for Valentine’s Day. This year is also special, because it marks the 10 year anniversary of the Galaxy Note line, so an anniversary model may be needed. As you can se this device has a camera design akin to the S21 and also a new, slimmer packaging. Apparently we don’t get headphones or a charger here. This is not the first Galaxy Note Fan Edition, since there was one back in 2017.

Back then Samsung came up with the Note FE to make up for the Note 7 exploding battery fiasco. It reused its parts, picked the best out of them and created the Note FE. The price was greatly reduced and the product sold in South Korea. What do we expect from the Note 21 FE? The last hurrah of the stylus, with new gestures and new drawing and picture editing features. We may also see the S Pen not getting its own hole for storage, but instead attaching to a case or to the back magnetically.

It’s only a matter of time till Android device makers copy Apple and launch MagSafe-like mechanisms and accessories. The 26 ms delay Note 20 stylus may be included here, while the back camera may have identical specs to the S21. A Snapdragon 888 or Exynos 2100 CPU would be nice, but we may also see last gen CPUs inside. Since Note 20 sold for 950 euros last year in the 4G version, this one is supposed to be even lower than that. Something like 700 or 800 euros would be realistic, but still pretty pricey.

The S21 would sound like a better and smaller option in the end. The Diagonal is expect here is 6.5 inches or maybe 6.7 inches, accompanied by a 4100 mAh battery, 8 GB of RAM and 128 GB of storage. Of course, this is just a concept and it will most likely remain so.

About Kelvin
Passionate about design, especially smartphones, gadgets and tablets. Blogging on this site since 2008 and discovering prototypes and trends before bigshot companies sometimes
Sony Xperia 1 Mark 3 Smartphone Gets a Beautiful Video Render   OnePlus 9 PRO Gets Official Looking Renders in All Four Colors, Video Too