OnePlus 9 PRO Gets Official Looking Renders in All Four Colors, Video Too 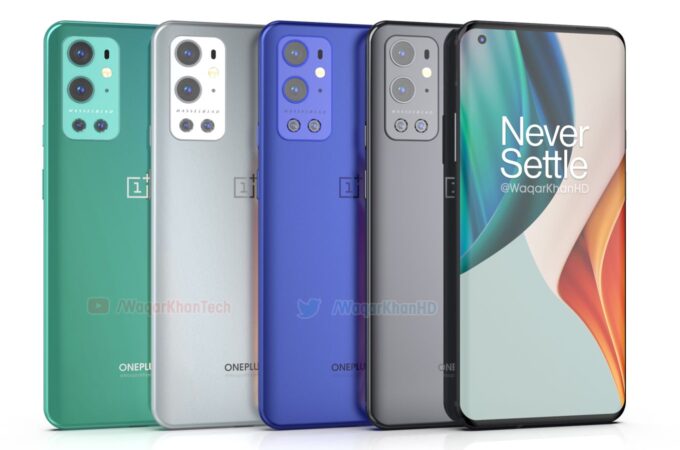 OnePlus 9 PRO registered a major leak this week, when we saw it being handled in front of the camera and learned it would have Hasselblad optics. Then we saw a render of it made by Ben Geskin, according to the leaks. Now we also get a set of renders from Waqar Khan, this time in 4 colors and also with a video showing the device in 3D.

OnePlus 9 Pro is shown here in four colors: green, black, blue and a sort of gray. It’s expected to feature a curved screen upfront, perhaps more curved than anything Samsung has launched over the past year or so. It also gets two big lenses for the back camera and in spite of having those cool new Hasselblad optics, the camera housing doesn’t protrude that much. We also get extra sensors, aside from the main ones, probably a laser focus one and IR sensor maybe.

The phone looks pretty slim and keeps a portion of the OnePlus 8T identity. My problem with the hues shown here is that they’re too vivid and glossy and the current trend is all about the frosted and matte look. Just look at the Phantom Black of the S21 series and you’ll figure out what I mean. The idea is to make the device look as if it were foggy, frosted, a darker hue that doesn’t reflect light. It protects it from dirt, fingerprints, grease and makes it appear more elegant.

I don’t like to talk about specs, but here’s what we know so far: the device has a 6.7 inch Quad HD 120 Hz screen, a Snapdragon 888 processor, 256 GB of storage and 12 GB of RAM. There’s 45W wireless charging here and 65W wired charging, plus a battery of at least 4500 mAh. Not much news on the camera front, but two things are clear: no 108 MP main camera and no periscope 5X optical zoom. Perhaps no optical zoom at all, which would alienate some fans.

About Kelvin
Passionate about design, especially smartphones, gadgets and tablets. Blogging on this site since 2008 and discovering prototypes and trends before bigshot companies sometimes
Samsung Galaxy Note 21 FE Gets a Totally Realistic Looking Concept   Xiaomi Mi 11 Ultra Gets Major Leak in Hands on Video, Pictures