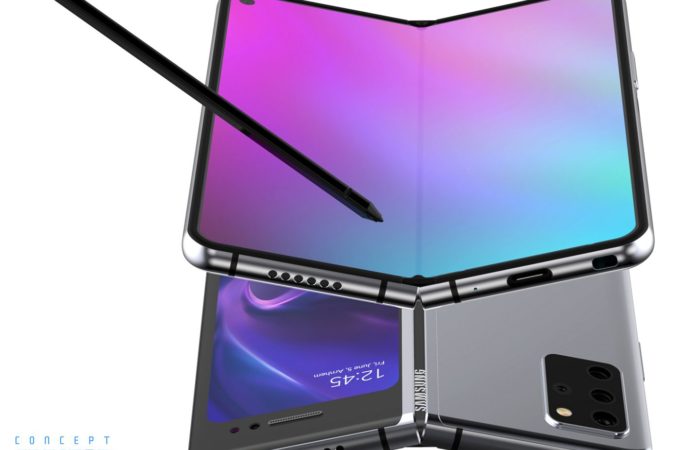 Samsung Galaxy Note Fold is the result of a combo between the Galaxy Note 20 rumors and the Galaxy Fold 2 ones. It’s got the famous S Pen inserted next to the USB-C port at the right of the Galaxy Fold. Luckily we’ve gotten rid of the ugly notch from the Fold, replace with a punch hole selfie camera. The bezels of the first Fold were rather big, but they seem to have been trimmed a bit this time around. The hinge has also been recreated by Jermaine Smit, aka designer Concept Creator.

Interestingly, he went into contact with JerryRigEverything, who took apart the Galaxy Fold last year. He asked for suggestions on a new hinge and created the fresh one shown here. Jermaine has worked no less than 350 hours on this project. Expect a rather large price and I sure hope that the whole screen protection thing has been fixed (plastic over glass and that whole thing). Codenamed “Project Winner 2”, the device is said to be powered by an Exynos 990 CPU, or maybe the new Snapdragon 865+. Expect 12 GB of RAM and a triple or quad camera at the back.

Turns out that the display size will increase from 7.3 inches to 7.7 inches and the UTG protection is here. 5G should also be here and judging from the renders, this is going to end up a pretty beefy foldable phone. As long as the battery is generous, I’m down with that. I see that the new hinge has an amazing animation in the video below, so be sure to watch it. I noticed pistons, some sort of cogs and some really intricate mechanisms. It’s much more complex than the Moto RAZR 2019.

Be sure to watch the whole video and making of. Amazing!

About Kelvin
Passionate about design, especially smartphones, gadgets and tablets. Blogging on this site since 2008 and discovering prototypes and trends before bigshot companies sometimes
Sony Xperia Goes Foldable in Xperia XZ5 Fold Concept   Samsung Galaxy Note 20 gets a Fresh Leak and Renders Inspired by It