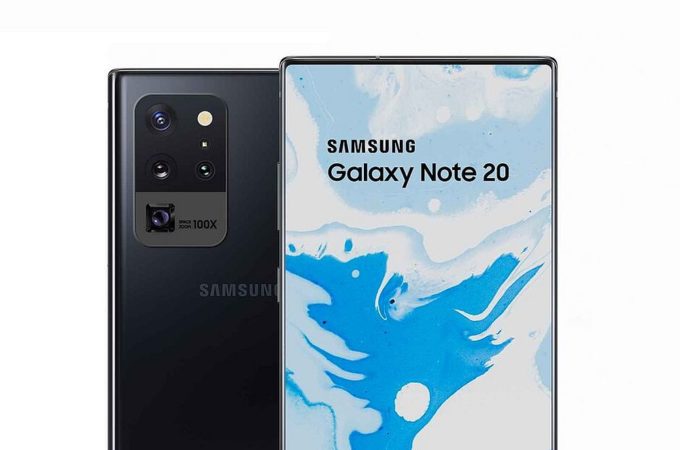 Samsung Galaxy Note 20 has been leaking even before the Galaxy S20 series was out and now leaks keep trickling in, concerning Samsung’s stylus-packing device. It will probably be out around summer end and the device should sport a camera similar to the S20 Ultra one. Today we show you new leaks, coupled with new renders from Phone Arena.

The leak comes from Roland Quandt and WinFuture in the form of a mold of a Note 20 or Note 20+ case. It’s a LED View Cover accessory and it reveals a pretty big cutout for the main camera. We expect at least a quad camera setup at the back and a LED flash. It’s very likely we’ll get an 108 megapixel shooter and a camera with 100x zoom again. We’re not sure if the Note 20 series has a Note 20, Note 20+ and Note 20 Ultra model or not. What’s interesting to see is how curved the sides of the mold are, in the area when the screen meets the frame.

Curved edge panels have been available for years now, but this year Samsung seems to be ready to reduce the radius of the curve. The new Note should also be more square-ish compared to the S20 series. Leaksters like Ice Universe and Max Weinbach also spoke about the Note 20 being a “S20 with S Pen and squared off corners”. Judging by the renders we get here, the device is going to have a camera that’s a bit more discrete and somehow integrate the selfie camera sans a punch hole in the screen.

That would mean Samsung has perfected the in display camera mechanism, which I highly doubt. It’ll probably be a hole in the screen yet again. The stylus should also get new features, including a camera, improved Bluetooth range, new remote control features. We’re also going to get new AR features.

About Kelvin
Passionate about design, especially smartphones, gadgets and tablets. Blogging on this site since 2008 and discovering prototypes and trends before bigshot companies sometimes
Samsung Galaxy Note Fold is a New Take on the Fold… and the Note   HTC U13 Plus 5G Will Probably Remain a Concept Phone…