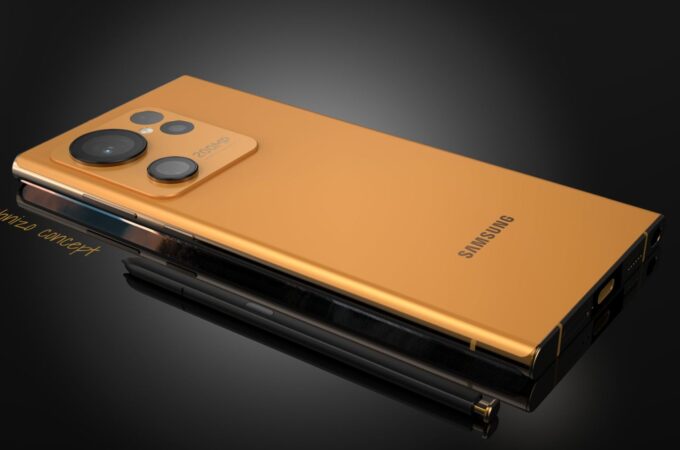 Samsung Galaxy S23 Ultra has been a staple among our concept phone renders over the past 6 months or so, but one more can’t hurt, right? This time it’s made by Technizo Concept and it features a 200 megapixel main camera, plus a Qualcomm Snapdragon 8 Gen2.

Galaxy S23 Ultra has a curved display and it comes with a nifty shade of gold, because it’s closer to a combo between beige and orange. It’s very hard for me to imagine where Samsung will take its flagship series. That’s because it’s a bit hard to just sell us a mere 200 megapixel camera and keep the other sensors intact. I also find it hard to believe they’ll go further than 10X optical zoom with the periscope camera. We do have a stylus with a special slot in the body and to me this device looks beefier than the two predecessors.

A few years ago we looked into the future and imagined we’d see phones sans ports, sans holes, sans buttons by 2023. Well, it doesn’t seem likely now. The USB-C port is forced as a feature by the EU and the megapixel wars are in the balance. If you look closely, 108 MP and 64 MP cameras can’t hold a candle to the latest 50 MP or 54 MP sensors. You know what would complete this gold-orange hue? If it were made of faux leather, even though that material is prone to wear and tear.

One thing I’d like to see more often is cropping from a large resolution sensor in order to achieve zoom, instead of using lenses for zoom. And since we have plenty of megapixels to play with, it would be time to use it. The only phone that did it was the realme 8 Pro believe it or not. I’d like to see more of One UI 5.0 in such concepts.

About Kelvin
Passionate about design, especially smartphones, gadgets and tablets. Blogging on this site since 2008 and discovering prototypes and trends before bigshot companies sometimes
Kodi and Other Essential Apps That all Android and iOS Users Need   4 Great Live Streaming Services for Mobile