Sent to us by Phoenix Pham, this Samsung Galaxy S5 design involves a curved screen, one that extends from one edge of the device to the other. The designer also bundled some specs this time and this sketch seems based on those leaked patents from a while ago. 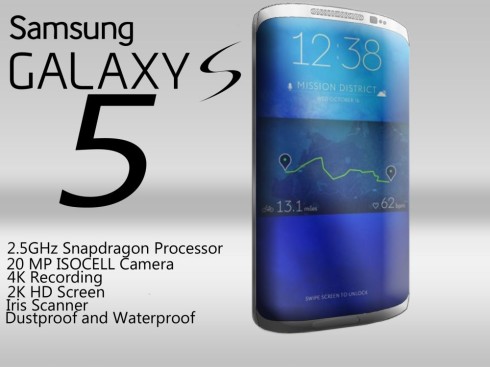 I can also see the leaked TouchWiz appear on the screen of the device. The 2014 Samsung flagship phone packs an edge to edge 2K screen probably with a 5+ diagonal and inside we’ve got a 2.5 GHz Snapdragon processor, probably the Snapdragon 805. There’s 20 megapixel Isocell camera at the back with 4K video recording and an Iris scanner courtesy of the front camera.

This Galaxy S5 concept is dustproof and waterproof and seems encased in a metal chassis. I’m curios to learn where the SIM and microSD card slots have been placed and if this model will adopt the same microUSB 3.0 port as the Galaxy Note 3. What do you think?

About Kelvin
Passionate about design, especially smartphones, gadgets and tablets. Blogging on this site since 2008 and discovering prototypes and trends before bigshot companies sometimes
Sony Xperia Vaio Concept May Actually Happen, Maybe With Windows Phone   iWatch C and iWatch S Rendered in Hands on Images