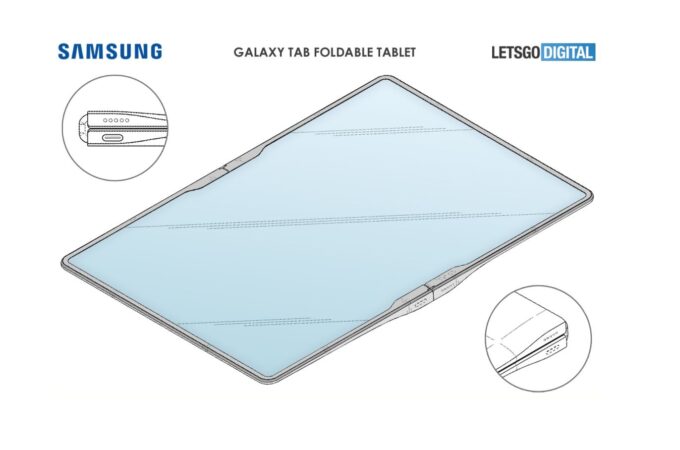 We’ve talked plenty about Samsung’s foldable phones and now this trend has reached tablets. As it turns out Samsung is working on a Galaxy Tab foldable tablet, that just popped up in a patent, turned into renders by Letsgodigital. Such a device was in the rumor mill 2 or 3 years ago, but it fell out of our radar.

Lenovo was the first with a foldable laptop/tablet, but aside from TCL there’s been few attempts at cracking this market. Dell also showed off concept at some point… Now Letsgodigital uncovered a patent for a foldable Samsung tablet and also created some renders of it. This is a slim device, with an odd approach: the speakers and connectors are placed at the height of the hinge. On February 16th 2021, Samsung Electronics was granted a design patent by the USPTO (United States Patent and Trademark Office) for a “Display Device”.

The patent has been included in the database for the World Intellectual Property Organization the meantime and it has triggered some renders. At the height of the hinge the housing is pretty thick and then it gets narrower towards the edges. Bezels are slim in general. It somehow reminds me of the Huawei Mate X2. There’s no cover screen here and no camera is available on the front or back of the housing. The device looks pretty sleek and elegant, but also… not tablet-like.

Samsung has made a small recess in the screen on both sides of the height of the hinge, which is where you’ll find the camera and flash, useful when you use the tablet PC in landscape mode. This doesn’t quite look like a 12 inch tablet, but maybe a 10 or 9.7 incher. A tri fold tablet was also in the cards at some point, but that’s very hard to make, since there could be multiple failure points. Would you buy such a device?