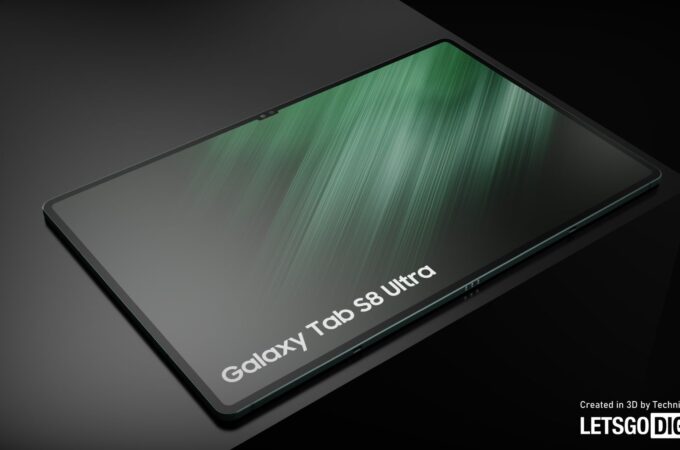 Samsung Galaxy Tab S8 Ultra is expected to debut as the Tab S8 series flagship in the following months. It could come with the Tab S22 on February 8th, or it could debut separately, in order not to distract the public from the main star. Till then we have a bunch of renders for the slate, thanks to designer Technizo Concept and Letsgodigital.

It’s a rare bird, since it has a notch upfront with two cameras. It will have a 14.6 inch Super AMOLED display with 120 Hz refresh rate, more prone to landscape use rather than portrait. The device will get narrower edges than before, even though that may lead to accidental touches. The notch will integrate a 12 MP sensor and also an ultrawide cam, probably a 5 MP or 8 MP shooter.

The screen has a 2960 x 1848 pixel resolution and Gorilla Glass 5 protection. The S Pen that comes with the tablet has been redesigned with lower latency, as low as 2.8 ms according to rumors, down from 9 ms for the pen with the Tab S7+. You will be able to attach the stylus magnetically to the tablet, at both the back and top. The slate will run Android 12 and One UI 4.0, while the specs also include a Snapdragon 8 Gen 1 processor.

About Kelvin
Passionate about design, especially smartphones, gadgets and tablets. Blogging on this site since 2008 and discovering prototypes and trends before bigshot companies sometimes
Importance of Enterprise Mobile App Development   iPhone SE 3 Gets Fresh Renders With Larger Screen, Wide Notch