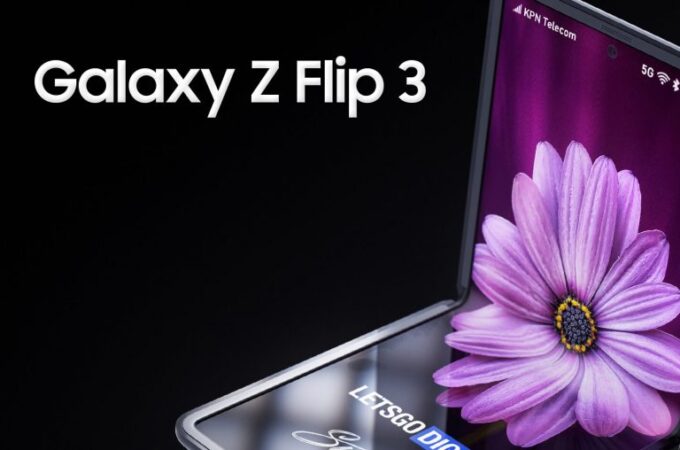 Samsung Galaxy S21 is launching on January 14th and we’ve got a ton of info about it, but not so much about the upcoming Samsung foldables. We’ve seen some Galaxy Z Fold 3 renders, but the Galaxy Z Flip 3 has only leaked in minor specs, till today. Letsgodigital is on the case and after doing some digging on a Korean forum and finding info and sketches, they’ve created renders of the clamshell foldable.

One would expect this to be the Galaxy Z Flip 2, but it’s actually the Z Flip 3. Samsung may perceive the Z Flip 5G as being the second model in the series. There are 3 core changes here compared to the predecessors:

The camera module at the back has a triple setup with large senses and it’s clearly borrowed from the Galaxy S21. It also is wrapped around the left corner, much like the S21 camera is. The color combination is also similar to the leaks: purple back and copper frame. We have a punch hole selfie camera and a double or triple size external screen compared to the very small panel of the predecessor. Smaller bezels may lead to a more protruding or ugly hinge, so Samsung may need to address that.

Otherwise, we expect a 120 Hz panel here, probably with a 6.7 inch or maybe even 6.9 inch diagonal, a Snapdragon 888 CPU and pretty much the same camera sensors as on the S21. New bristles and screen protection may be applied to keep the hinge and screen safe. Don’t expect a debut too soon, since Q3 2021 is on the lips of many leaksters.

About Kelvin
Passionate about design, especially smartphones, gadgets and tablets. Blogging on this site since 2008 and discovering prototypes and trends before bigshot companies sometimes
Huawei P50 Pro Fresh Renders Are In, Based on Older Leaks   Recommended: Free but Powerful File Recovery Software (support for recovering phone files)