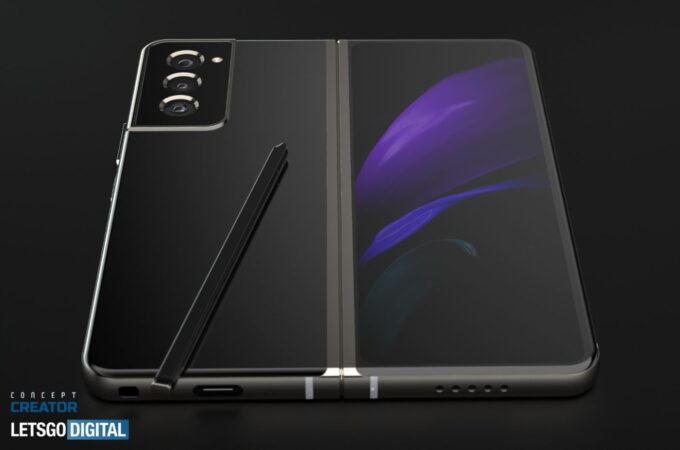 A new Samsung Galaxy Z Fold 3 concept has been long overdue, considering recent leaks and rumors. I know you’ve probably got Galaxy S fatigue after so many leaks and we also saw the Note 21 Ultra leaking recently, so let’s feast our eyes on the latest Concept Creator design. It’s a project published by Letsgodigital, so all credits go to them of course.

First of all, the Samsung Galaxy Z Fold 3 is a foldable phone, but also one that gets a stylus. In a highly detailed video render made by Concept Creator, we even get to see the innards of its camera, as well as the hinge elements. The new foldable is expected to debut at the end of the summer, maybe in early autumn. The Z Fold 2 5G was a huge upgrade from the first Galaxy Fold, getting rid of all of its major problems. No more notch, no more problematic plastic screen cover, better hinge and improved hinge resilience and angles.

The screens got bigger and also the cameras. So what’s left to improve? Apparently we need a stylus, a low latency one, but putting a hole for it on a foldable is going to be tricky. Samsung may use a special case, like it will on the S21 Ultra, according to leaks. In 2021 the screens may become even bigger, particularly the external one. I honestly expected to see an under display camera here, but we’re not there just yet, sadly. Samsung won’t risk it with a foldable and it’ll probably inaugurate the tech on an experimental Galaxy A maybe at the end of 2021.

We need improved zoom and low light filming on the Z Fold 3, since those were lacking on the Z Fold 2. Samsung is also likely to introduce a new generation of Ultra Thin glass. The stylus may also pose a problem, since it may damage the screen, the foldable one and its frail extra plastic protection on top, which we’re still stuck with. We also need a bigger battery and somehow a lighter body, plus a smaller waistline when the device is closed. Z Fold 3 could end up being priced at around 1599 euros or even closer to 2000.