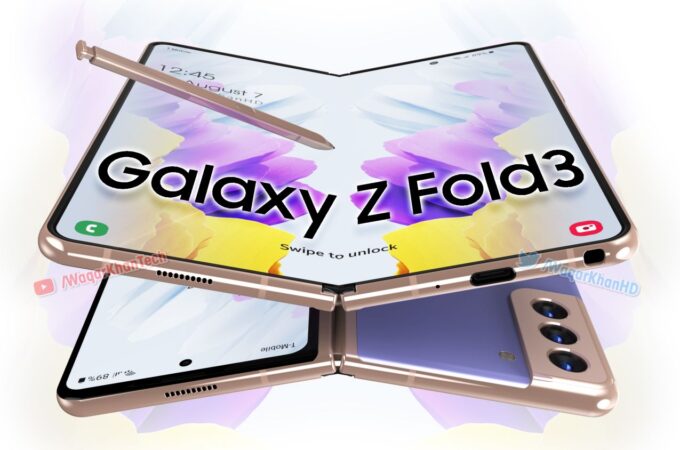 With more than 3 sources saying that the Galaxy Note series is kaput, we’re starting to believe it really is. Also, the Samsung Galaxy Z Fold 3 is most likely to take its spot. That’s probably why it’s getting so hyped up and leaked lately, with a fresh launch date of May being thrown around. The handset also got a bunch of cool renders and a 3D video from Waqar Khan, who did a superb job.

At its core the Galaxy Z Fold 3 is a Z Fold with a stylus and the S21 camera design and colors. We’re expecting an under display camera, according to rumors, but the renders only include a punch hole on both the inner and outer screen. There also needs to be a major change in the UTG layer, which may be damage by the stylus, after repeated friction. Thus we need a new screen protection, or a new type of stylus. The back side is totally the S21/S21+ in design, while the hinge seems more discrete now.

New bristles are included to clean up dirt and particles getting inside the hinge. One thing that needs upgrading if you ask me is the camera setup. The Z Fold 2 was weaker than the S20 series in this regard, particularly in low light conditions. It also wouldn’t hurt to see an even bigger diagonal on both the outer and inner display. Or at least give us narrower bezels, for a sleeker design. Software-wise, I expect new multitasking features, extra split screen applications and the stylus also thrown in for good measure.

I’m very curious to see Samsung fitting the Z Fold 3 with a special slot for the stylus.

About Kelvin
Passionate about design, especially smartphones, gadgets and tablets. Blogging on this site since 2008 and discovering prototypes and trends before bigshot companies sometimes
iPhone 12s Pro With Under Display Touch ID Sensor Gets Rendered   Sony Xperia 1 III Gets First Renders, Gets Periscope Telephoto Camera