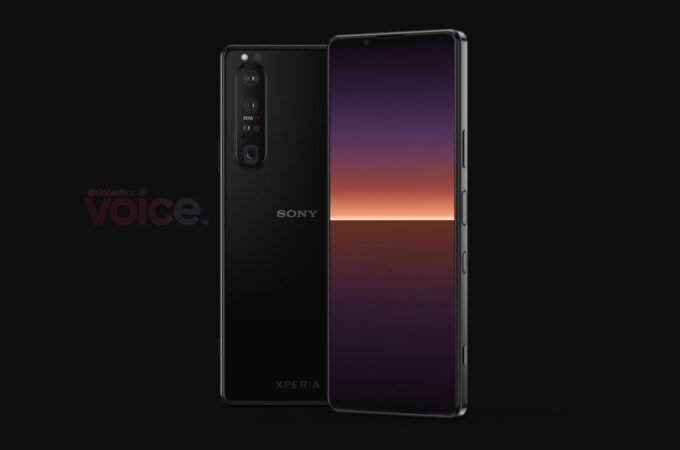 @OnLeaks aka Steve Hemmerstoffer is at it again, leaking hardcore flagships for the year 2021. This time it’s the Xperia 1 III that’s leaking out, with a design that’s pretty easy to anticipate and predict. However, the renders we have here also show some novelty in the camera area.

This yet to be announced flagship phone is supposed to rival the Galaxy S21, Huawei P50 Pro, maybe also the iPhone 13 once it comes out. First of all, the device keeps the same core format as the Xperia 1 and Xperia 1 II: rectangular, angular, flat and narrow, at 21:9 in aspect. The bezels of the screen have been reducer a lot, but Sony still won’t use a notch or punch hole. The buttons look a bit more refined, but we’re still getting two extra buttons aside from Power and volume: camera and Google Assistant (which can be customized probably).

At the back we notice the Zeiss T logo, two main cameras and a periscope telephoto lens. The source also mentions a glass rear panel, a flat edged metal frame the following measurements: 161.6 x 67.3 x 8.4 mm (9.6 mm with the rear camera bump). We also learn that the device dimensions have been shrunken a bit from the last year model, but the thickness has been increased. The screen remains a 6.5 inch OLED 4K HDR unit with 21:9 CinemaWide aspect. The rear camera also includes a 3D iToF sensor and inside there’s most likely the Snapdragon 888 CPU.

Other must haves are the 5G support, audio jack, microSD card slot, fingerprint scanner in the Power button and dual front stereo speakers. I’m pretty curious about the periscope camera and if Sony went for 3X optical zoom, maybe 5X or even 10X, which would be shocking.

About Kelvin
Passionate about design, especially smartphones, gadgets and tablets. Blogging on this site since 2008 and discovering prototypes and trends before bigshot companies sometimes
Samsung Galaxy Z Fold 3 Gets a Stylus, S21 Camera and More (Video)   Samsung Galaxy Watch 2.0 finally bridges the gap between fitness tracker and watch