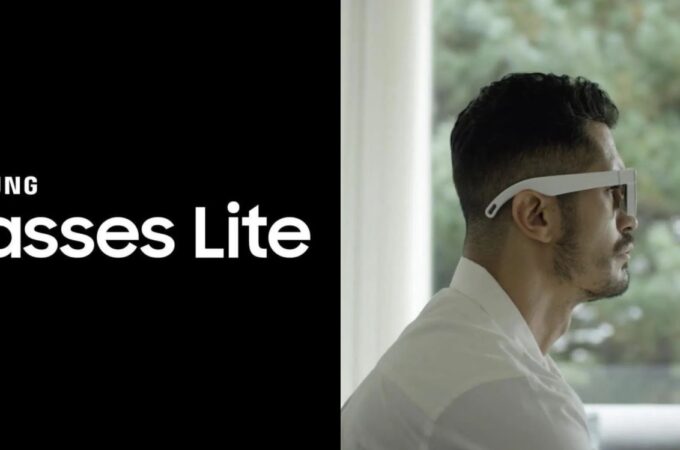 It’s been exactly 10 years since Google started pushing its Glasses a lot everywhere, but that trend failed to take off. Much like modular phones, I’d say. Apple has been in the news more often, as it’s preparing its own shade of AR/VR glasses. Now Samsung is one upping its arch rival apparently… one called Samsung Glasses Lite.

Microsoft is already playing with mixed reality, while Facebook obviously has Oculus on its side. Sony has yet to announce its new PS VR, which is long overdue. Back to the Samsung leak, a Twitter account going by the name of WalkingCat has leaked two videos, showing off Samsung’s future Glasses Lite, pairs of AR glasses. The Twitter account has a pretty solid track records, between the recent Galaxy Tab S7 Lite and Galaxy Chromebook 2 leak. Basically what you’re seeing here are leaked official Samsung product presentation videos.

The first of them shows “Samsung Glasses Lite”, a pair of glasses that are much thicker than regular eye frame. They also have a transparent screen integrated. The product is also shown on peoples’s faces and the person is viewing content/info via the Glasses Lite. We even get to see the person watching movies on glasses, controlling a drone or using a DeX system to get some work done. Even a racing game is shown. The Galaxy Watch is displayed as a vital tool to control the glasses.

They’re quite thick by current specs requirements and they come with a touch enabled frame. Other features shown in the second video are AR Office, Holo Call and AR Simulator, with room scale immersion. AR Office offers a projected keyboard, that only the user sees and can use to type on. You can zoom in, with unlimited field of view, unlike the first video. I have to say that this looks pretty plausible and would make sense as a revolutionary new gadget.

About Kelvin
Passionate about design, especially smartphones, gadgets and tablets. Blogging on this site since 2008 and discovering prototypes and trends before bigshot companies sometimes
iPhone 13 Pro Gets New Camera and New Display In this Render Series   Sony Xperia 1 Mark 3 Smartphone Gets a Beautiful Video Render