The following Samsung concept phone was created by Deviantart member rvaardesigns and has a camo vibe to it. The designer claims it’s the first full metal body smartphone from Samsung and that it comes with a glossy beveled edge. 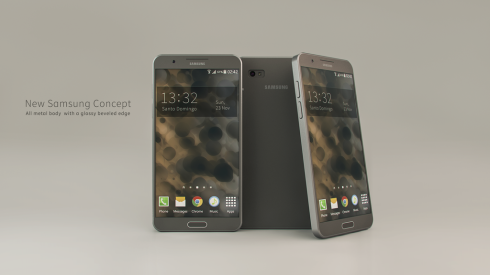 The device is a bit thicker than expected, but it comes with the trademark Home button, a physical one and the ring around it tells me there’s a fingerprint scanner in there too. This handset would fit in line with the gear that the Metal Gear Solid characters use, if you ask me. The format isn’t too far from the Galaxy Alpha or the Galaxy A series, but now everything is metal.

This makes the device prone to chipping on the sides, a bit and I see that the camera at the back is integrated very discretely. There’s one thing I’m sure here: this Samsung concept phone would totally be called an iPhone clone if it used an unibody metallic case.