Ben Ling usually sends us a new Sony Xperia concept phone each week and this time he didn’t disappoint and sent us the Sony Xperia Z design. We’re dealing here with an interesting 4.3 inch smartphone with a sloped lower and upper side, something I haven’t seen Sony doing recently. It’s also nice to see a combo of white case and black, glossy front panel. 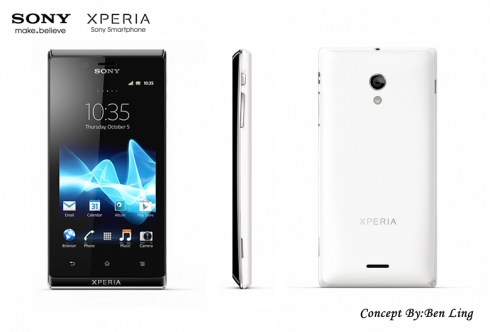 There’s something very iPad-like about this model, if I may say so. Sony Xperia Z uses a 4.3 inch Full HD TFT touchscreen, which is a crazy resolution for such a small display and we also get a 14 megapixel camera with LED flash and Exmor R sensor. The camera does 16x digital zoom and Full HD video recording at 1080p. There’s also a front 2 megapixel camera with 1080p capture and a quad core 1.2 GHZ Snapdragon processor inside. The handset is 9.9 mm thick, features NFC and weighs 121 grams.

Other specs include 1 GB of RAM, Android 4.1 Jelly Bean, 16 GB of storage, Sony Mobile BRAVIA Engine 2 and the xLOUD technology. Under the hood there’s Li-Ion 1910 mAh battery and finally there’s also Bluetooth 4.0 among the specs. I would buy this phone in heartbeat! Would you?