Bob Freking created a new tablet concept, the Razer Atlas, a 7 inch device with a Core i7 CPU, plus stylus, keyboard, mouse compatibility and phone features. The name Atlas comes from the Greek mythology character, the one who held the world on his back. He chose Razer, because it makes sexy devices, with top notch specs. 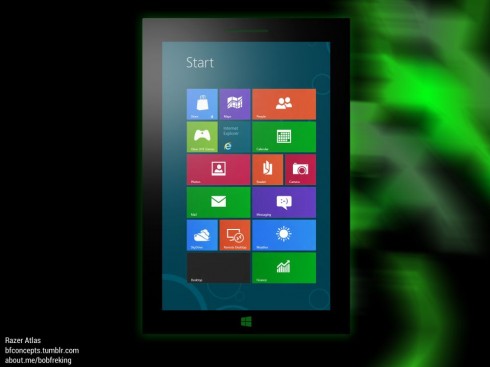 The Razer Atlas is a 7 inch Windows devices, with a Win RT version and a Win 8 version. So it can be selected in a Tegra version or core i3 to i7 version and it will have 4 GB of RAM, a 16 megapixel camera and a 7 inch 1080p HD screen. There’s also the option of associating keyboards and mice to it, plus the same S Pen that Samsung has. The price of the RT version is $800, while the maximum for the Windows 8 tablet is $1800, with Core i7 CPU and 4 GB of RAM.

That’s good enough to run games like Crysis or Portal easily, according to the designer Bob Freking. I see this as a desktop replacement and the definite laptop killer. It’s still too big to replace a phone and too little to play Crysis, if you ask me. 10 inches suit Windows 8 better, I think.