This is probably the first Sony Xperia X concept I see that doesn’t have a huge display. Instead Ben Ling imagined a 4.3 inch Full HD TFT screen, which is quite an impressive feat even 2 years from now. Such a huge resolution on such a small screen is a real performance. Let’s see what else this handset brings. 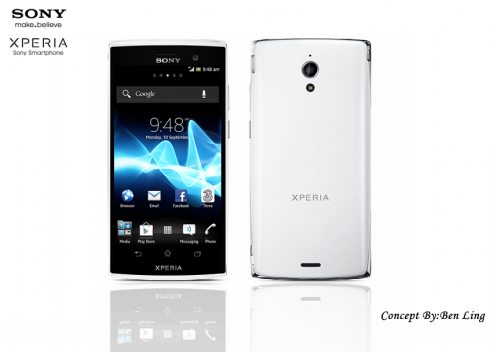 Xperia X has a scratch resistant capacitive touchscreen, a 14 megapixel camera at the back with Exmor RS sensor and 16x digital zoom, as well as Full HD video recording. There’s also a front 2 megapixel camera and a quad core 1.5 GHz Snapdragon S4 Pro processor, that also brings an Adreno 230 GPU. The smartphone measures 8.6 mm in thickness, supports NFC and weighs 120 grams. It has 2 GB of RAM and runs Android 4.0.4 Ice Cream Sandwich, supporting an upgrade to Android 4.1.1 Jelly Bean.

32 GB of storage are available and the screen uses Sony Mobile Bravia Engine 3. Another trademark Sony technology on board is xLOUD and the power source here is a standard Li-Ion 2500 mAh battery. Finally, the Sony Xperia X has Bluetooth 4.0, 10 finger multitouch and up to 64 GB of extra microSD storage. An interesting design by Ben Ling.

About Thrystan
HTC One XXL is a 10 inch Tablet With Tegra 4 CPU   Samsung Galaxy S4 Mockup by Jsus Features a 4.8 inch Edge to Edge Display