Remember the Xperia Tablet and the Sony Tablet S slates? Well, designer Abel Verdezoto decided to use their design and create a smartphone with the same look. The result is the Sony Xperia X concept, shown below. We’re dealing with a smartphone that features a 4.6 inch display and that folded magazine style design of the Xperia Tablet. 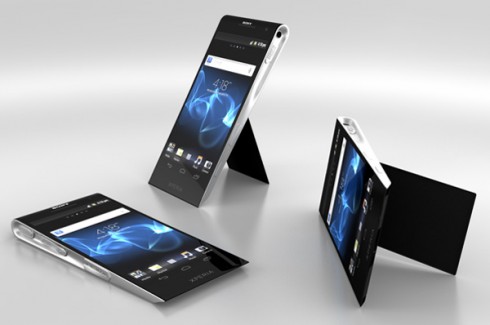 The handset is 5.5 mm thick at its base, the thinnest and 11.2 mm at its thickest, at the top. To me it looks a bit bulky and massive, especially wide and the bottom looks fragile and easy to crack. The folded magazine style edges were bad for the original tablet, since it was particularly hard to press the buttons on the side because of the small roof it had over them, so I don’t like the design of Sony’s tablet, to be honest. This phone is also pretty massive for today’s standards and not so impressive.

At least it has some capacitive or virtual buttons, the latest Android I guess, a big 4.6 inch display, mini HDMI port, SIM slot, microSD card slot and dual cameras. The Xperia logo at the front also works as notification system via light, as shown in the colourful shot below. There also seems to be a kickstand at the back, much like the one used on the Surface Tablet from Microsoft.