If you click David Quijada’s name in this sentence, you’ll see a series of bold designs he has created and in 2015 he continues the same trend. Today he unveils the Sony Xperia Q phablet, in two versions: Xperia QA and Xperia QT. 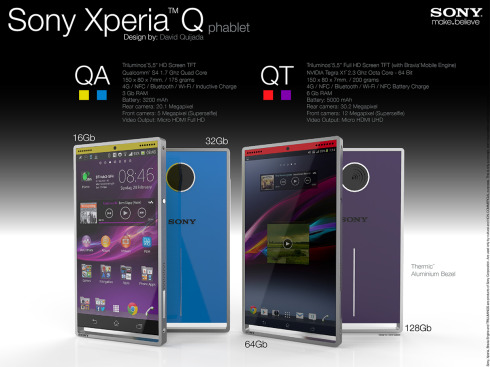 Sony Xperia QA packs a 5.5 inch HD TFT Triluminos screen, as well as a Qualcomm Snapdragon S4 1.7 GHz quad core processor and 4G LTE connectivity. We’ve got inductive charging on board, 3 GB of RAM, a 3200 mAh battery and a 20.1 megapixel shooter. There’s a superselfie camera upfront and a micro HDMI output. This unit has a special case around the main body, sort of like a bumper case. The design claims it the Q phablet uses an aluminum thermal bezel and an assembly technology based on two screws alone.

Sony Xperia QT is a 5.5 inch Full HD display device and inside it we find a surprise: the freshly announced Nvidia Tegra X1 octa core processor, the one announced at CES 2015. This unit has a crazy 6 GB of RAM and it’s basically a monster phone. It also comes with a 30.2 MP camera, a 12 MP superselfie shooter and a micro HDMI out. The battery is also huge at 5000 mAh.

About Kelvin
Passionate about design, especially smartphones, gadgets and tablets. Blogging on this site since 2008 and discovering prototypes and trends before bigshot companies sometimes
Sony Xperia Micro is Here, Keeps Everything Minimal, at 4 Inches in Diagonal   Samsung Makes Tony Stark’s Avengers Age of Ultron Smartphone; Here It Is, at CES 2015!