Imagine the PS Vita combined with the HTC One X… and you get something like the Xperia Play Duo concept, shown below. Remember when Victor Cao teased us with an upcoming concept? It’s been weeks since then, but he delivered and here we are with a new PlayStation Phone or an “Xperia Play 2”, if you want. 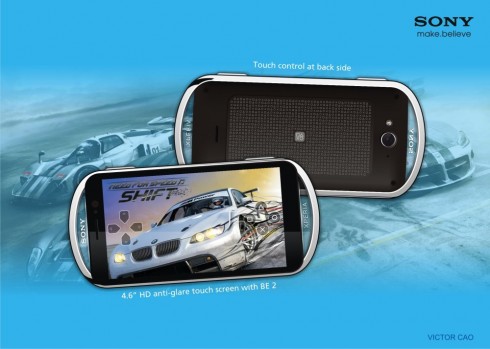 Victor says that the name “Duo” comes from the fact you can control both sides of the phone, front and back. The back area is basically a touchpad, just like on the PS Vita. Xperia Play Duo seems to have an upper and lower transparent surface, in the areas where you grip the handset for gaming purposes. As far as specs go, you get a 1.6 GHz quad core Krait CPU, 2 GB RAM, Adreno 320 GPU, a 4.6 inch HD touchscreen with anti glare and BE 2. Stereo speakers are also on board, as well as multiplayer support and a 3000 mAh battery.

This Xperia concept runs Android 4.1 Jelly Bean, it has PlayStation certification, Clear Bass, Clear Audio and an 8 megapixel camera with Full HD video. One touch NFC, Miracast and 32 GB of storage round up the specs list. Xperia Play Duo will also resist water, apparently. Ready to trade your console for a phone?