Sanjaya Kanishka saw the Sony Xperia Z getting introduced at CES 2013 and thought it wasn’t enough. Thus, the designer envisioned a superior device, dubbed Xperia Pro X, that features a secondary Tactus display, used as a keyboard or gaming control area. Tactus is a screen manufacturer, that’s looking for a solution when it comes to touch input that feels like the physical one. 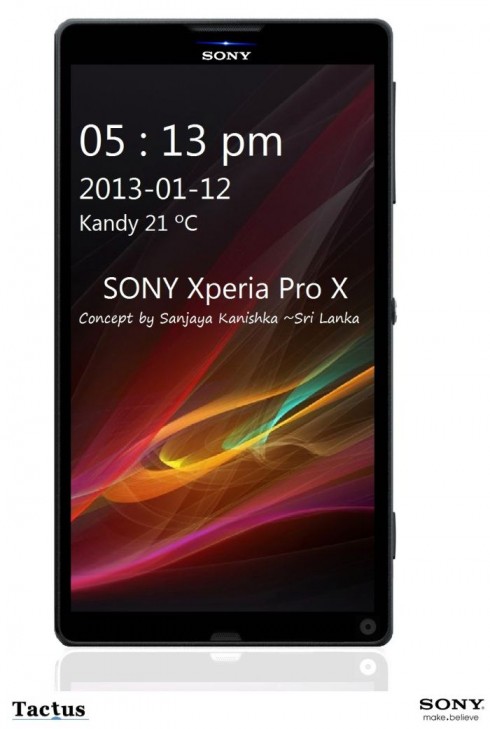 Sony Xperia Pro X is inspired by the Tactus technology and as far as design goes, it looks quite a bit like the Xperia Z, keeping the rectangular shape. Its features include a 5 inch LED backlit IPS+ TFT screen with 1080p resolution and 443 ppi. Mobile Bravia Engine 2 is also here, as well as Corning Gorilla Glass 3 and that secondary display for input/gaming. Inside the device there’s a 2.3 GHz quad core processor, a Snapdragon 800 chipset with Adreno 330 GPU.

At the back we’ve got a 13 megapixel Exmor RS camera, with 1080p HDR video recording, dual LED flash and accompanied by a front 2 megapixel camera. Other specs include 16 GB of storage, a microSD card slot and 2 GB of RAM. DLNA, NFC, WiFi hotspot and Bluetooth 4.0 are all here, together with USB 3.0 support. Xperia Pro X runs Android 4.2.1 Jelly Bean and packs a 3200 mAh Li-Ion battery. It’s available in white, black, pink and gold and it has a sliding form factor, for the second screen.

The buttons on the Tactus keyboard are supposed to “pop out”, giving a real sensation of typing and gaming. If you’re wondering about that, there’s a Tactus demo below:

About Thrystan
Samsung Galaxy S4 Speculations and Predictions, Plus a Few Images   Microsoft Surface Phone Concept has a 5 Inch Display, Even Has a Keyboard (Video)