Ben Ling saw that recently that has been a leak on the web of a handset called the Sony Xperia SP and created a concept phone under this name. We’re dealing with a 4.6 inch smartphone with a Full HD TFT shatter proof screen, that’s also scratch resistant. The Xperia SP has a 14 megapixel camera LED flash and Exmor RS sensor. 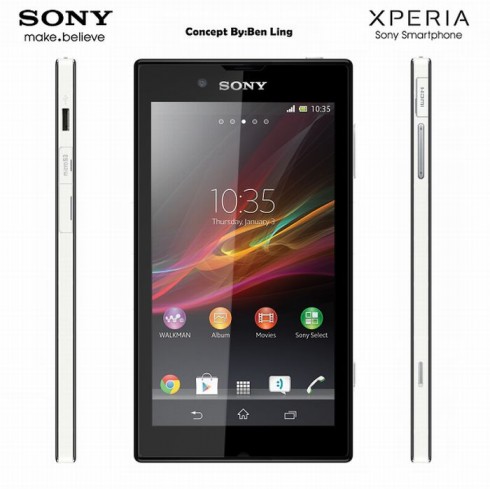 16x digital zoom is also here, as well as Full HD video recording through the camera. Upfront we’ve got a 2.2 megapixel camera with 1080p as well and inside the Sony Xperia concept we find a quad core 1.5 GHz Krait processor, of the Qualcomm Snapdragon S4 Pro kind. The battery is built in and there’s also an Adreno 320 GPU included. Sony Xperia SP measures 7.5 mm in thickness, weighs 138 grams, features NFC, 2 GB of RAM and 4G LTE.

It runs Android 4.2 Jelly Bean, has 32 GB of storage and a 479 ppi pixel density. There’s also Sony Mobile Bravia Engine 2 technology on board, the xLOUD experience and a Li-Ion 2500 mAh battery. There’s also Bluetooth 4.0 and a microSD card slot. As far as the design is concerned, I like the profile of the phone, especially the discrete integration of the HDMI and microSD, but I’m not a big fan of the facade, since it looks a bit old and leaves too much space unused at the bottom.