In spite of some websites saying these images are real, I tend to believe the following Xperia Z4 and Xperia Z4 Ultra render is a mere concept, made by a designer. I’m very cautious with that, because the bezels of the Xperia Z4 Ultra shown here are suspiciously slim… 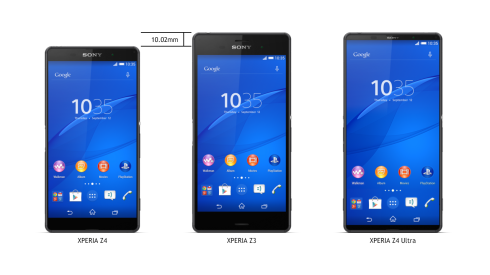 We have seen our share of devices with uber slim edges, but this one may feel like too much. We also couple that with the leak that says the Xperia Z4 Ultra will have front stereo speakers. I wonder where they will actually fit, since we almost have no bezel at the top or bottom… Anyway, we were also lucky enough to get some specs of the Ultra as well. The device will supposedly feature a 5.95 inch display with 2880 x 1440 pixel resolution and 18:9 aspect.

The Xperia Z4 meanwhile is somehow shorter than the Xperia Z3 and its edges are more realistic. Back to the Z4 Ultra, it’s also said to come with a 20.7 MP Exmor RS camera, with 25600 ISO, 25 mm G Lens and RAW capture. The phone measures 8.51 mm in thickness and has S Force front surround sound, a feature that was also present on the Xperia Z3.

About Kelvin
Passionate about design, especially smartphones, gadgets and tablets. Blogging on this site since 2008 and discovering prototypes and trends before bigshot companies sometimes
What Do You Get if You Cross a Lumia With the Surface? Answer: Microsoft Lumia Surface 1   HTC Nexus 5 2014: What if…