There’s no doubt that Samsung is making TOO MANY devices for its own good. They make everything, from fridges to air conditioning systems, midrange phones, tablets, PCs, components, CPUs and smartphones. How about a watch? Mohammad Mahdi Azimi has an idea about that. 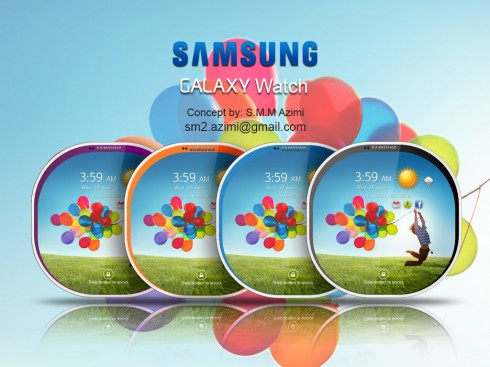 What you see here is the Samsung Galaxy Watch concept, a beautiful design that seems to keep some industrial design elements from the Galaxy S4. The watch isn’t exactly rounded, since it has a lot of straight edges, but it does feel curved at the top and bottom. The screen is very crisp, so I imagine it’s a HD display with the diagonal around 3.5 inches, let’s say.

The designer didn’t send us any specs, so we’re speculating on Samsung’s watch. This gadget should also come with 1 GB of RAM, a dual core Exynos CPU should be enough, plus the likes of S Health, S Translate and some other specific Samsung apps. There’s no trace of camera here and I imagine this serves as more of a companion to phones than standalone Samsung watch.

About Thrystan
Icon One Smartphone Concept is Metallic, Edge to Edge, Revolutionary   iPhone 6 Concept Tailor Made for iOS 7 by ADR Studio