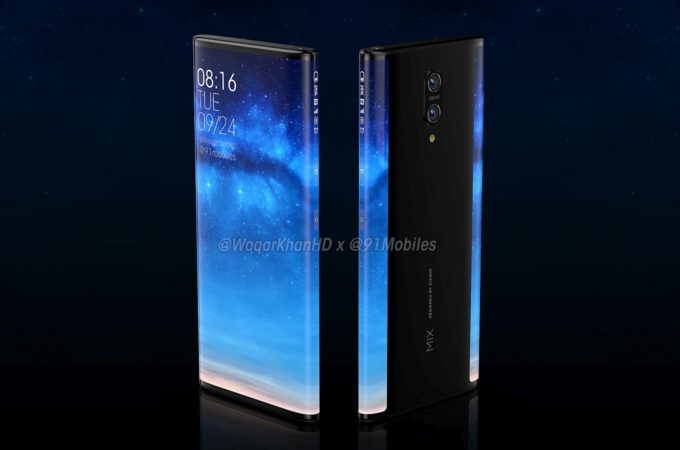 Even though the Xiaomi Mi MIX Alpha brought some extreme innovation in the design department, people still wanted a Mi MIX 4. That failed to happen, but it may come in 2020 and till then we have a concept of it. It’s the creation of Waqar Khan and 91Mobiles and there’s renders of it below.

The idea of a wraparound display appears again and this time the Xiaomi Mi Mix 4 is inspired by a recent Xiaomi patent that leaked. Xiaomi Mi Mix 4 only seems to have a dual back camera, but that’s subject to change and just a placeholder basically. The screen doesn’t have clear bezels and it curves on the sides and continues at the back. The camera is now centered and includes a new 108 MP sensor, possibly the one from the Galaxy S20 Ultra.

There’s no longer a strip from the Xiaomi Mi MIX Alpha, but rather a larger portion at the center back. We have virtual volume buttons on the sides and also the sides of the device serve as notification secondary screens. There are many problems with such a wraparound screen: it makes the device more fragile, also more slippery and the back portions of the screen seem under used. Somehow even an audio jack made the cut. The device is overall very curved and “fat” reminding me of an American football, like the Galaxy S7 did.

There are also rumored leaked specs, like a 2K display, a Snapdragon 865 CPU, a 4500 mAh battery and up to 1 TB of UFS 3.0 storage, plus 12 GB of RAM. There’s also 45W wired charging and 5G of course. Honestly, this feels like a Mi Mix Alpha with a wider back bar and a more minimal camera. Is there a market for it?

About Kelvin
Passionate about design, especially smartphones, gadgets and tablets. Blogging on this site since 2008 and discovering prototypes and trends before bigshot companies sometimes
Vivo APEX 2020 Concept Phone Announced: 60W Wireless Charging, Under Display Selfie Camera and More   Folding iPad Pro is the Stuff of Dreams for Now