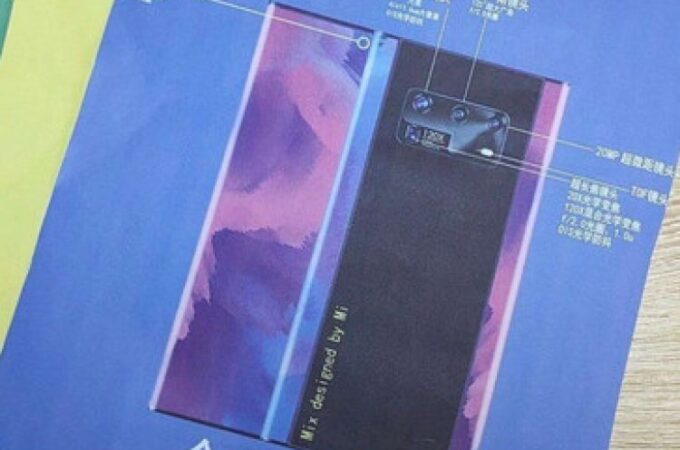 Xiaomi Mi Mix 4 has been a ghost for the past year, leaking several times before the Xiaomi Mi Mix Alpha was unveiled. Afterwards the series was said to be killed off, as it didn’t make sense anymore. Lately we’ve seen some movement in this area, with Xiaomi activating its Mi Mix social page again. And today we also get a leak.

well, I have almost zero faith in the realness of this leak, as you can also see from the score is received on Slashleaks. What has me thinking is that the design shown here is similar to the one shown by a recently leaked Xiaomi patent. We seem to be dealing with a foldable phone, one that emulates the Huawei Mate XS, but doesn’t got all the way. It curves the main external screen towards the back side, but only with a small portion of it bending backwards, not half of the screen.

The rest of the room is spared for a pretty big horizontal camera, the kind of which you don’t see too often nowadays. Samsung used to have horizontal cameras on the Galaxy S10 series and some Note models, but we haven’t seen this approach too much lately. Also, if you look closerly, you notice that the Xiaomi Mi Mix 4 shown here has quite the camera setup:

Some say this is just a Photoshopped Xiaomi Mi Mix Alpha, which it definitely may be. At least, if it’s a foldable, the bezels are narrower than the Huawei Mate XS ones.

About Kelvin
Passionate about design, especially smartphones, gadgets and tablets. Blogging on this site since 2008 and discovering prototypes and trends before bigshot companies sometimes
iPhone 13 Just Got a Fresh Concept, With Penta Camera Setup at the Back   Nokia 7610 5G Gets the 2020 Treatment, With 5 Crazy Cameras