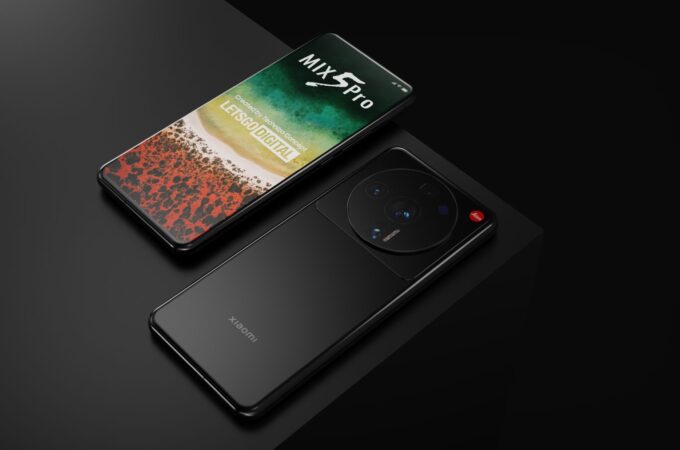 A new theory came to life today, as the Xiaomi 12 Ultra seems to have fallen through the cracks. We’ve previously heard that the Xiaomi 12 Ultra wouldn’t come in the first half of the year… or not at all. Today we learn according to Twitter source Teme that the device will actually be replaced by the Xiaomi Mix 5 Pro. It has also been rendered by Letsgodigital.

The Xiaomi 12 series is off to a good start, with the Xiaomi 12, Xiaomi 12 Pro and Xiaomi 12x already launched, but we’re lacking a proper and revolutionary flagship. Turns out that the device we’ve seen leaked so many times with a huge back camera, that caused many holes in leaked cases was in fact the Xiaomi Mix 5. Using all the available info, graphic designer Parvez Khan, aka Technizo Concept, created series of product renders of the new flagship.

It appears in colors like black and gray with a rather basic facade, albeit sans front camera cutout, plus a back camera taken straight out of the Xiaomi 12 Ultra leaks. There’s also a Leica branding, a theory I keep hearing about lately. Huawei’s partnership may be on hold or dissolved with Leica, who may have jumped in Xiaomi’s boat. The lack of a front camera is actually a continuation of the Mix 4 trend, which had the selfie camera below the screen.

A source also reports that the Xiaomi Mix 5 Pro will come with a 6.74 inch AMOLED screen with a WQHD+ resolution and an adaptive 120 Hz refresh rate. The display has a peak brightness of 1500 nits and Gorilla Glass Victus, or even Gorilla Glass Victus Plus may be available here, with HDR10 support. The large camera module comes with a new Samsung ISOCELL GN5 sensor, with a 50 MP resolution and Dual Pixel Pro autofocus. There’s also a 48 MP ultrawide camera and a 48 MP periscopic telephoto camera with 5X optical zoom.

The Surge C2 image processing sensor will also be present. The most shocking part of the leaks is the fact that we’re supposed to be getting a 200W charger. I’m also curious to see if the ceramic back will be kept, since both the Mix 4 and Mi 11 Ultra had one.

About Kelvin
Passionate about design, especially smartphones, gadgets and tablets. Blogging on this site since 2008 and discovering prototypes and trends before bigshot companies sometimes
15 Most Important Inventions Of The Last 30 Years – From Internet To Streaming Services   Seven Ways Your Smartphone Can Help You Prepare for Speech