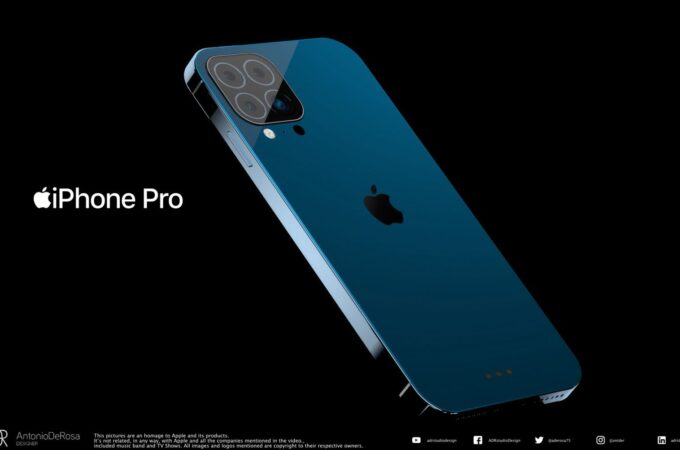 Antonio de Rosa has been one of the visionary designers we’ve covered on this website for the past years. He usually renders futuristic iPhones and other Apple devices and now he’s tackling 2022 and beyond. Apparently he doesn’t see an iPhone 14 happening, but rather an iPhone Pro… which is somewhat modular. Check it out below and also check out Antonio’s Tesla Phone here.

The Apple iPhone Pro is the first portless iPhone, with a 240 Hz screen refresh rate and also 4 cameras with special Astro Photography features. MagSafe 2.0 is an improvement from the first generation and while you may be tempted to dream about stronger magnets, you also have to worry about their interaction with pacemakers and other precision and medical equipment. The new MagSafe has a special dock port designed to connect powerful accessories like powerbanks and also a snap on camera with powerful optics.

The square camera design is here to say, but the facade is now seamless, edge to edge almost, but somehow keeps the damned notch. It’s smaller, I’ll give it that much. The flat metal frame is also here to stay. It’s interesting to me that Apple is somehow going backwards and instead of putting more components inside, they’re breaking apart the iPhone and attaching modules via MagSafe. This means that they’re ready to make more profit from these modules and they’ll keep battery life weak and perhaps also the camera, to sell those attachments.

It may offend some hardcore Apple fans, if this strategy is real, making them seem greedy and corporate-oriented ahead of consumer-oriented. On the flip side, if they do choose this sort of modularity, Android device makers may follow suit and bring back the likes of Modu, Project Ara, Moto Z modules.

About Kelvin
Passionate about design, especially smartphones, gadgets and tablets. Blogging on this site since 2008 and discovering prototypes and trends before bigshot companies sometimes
Samsung Galaxy A82 Dual Slider Smartphone is Eye Catching In New Renders   How To Babyproof Your Home With Affordable Items