I have seen an Apple iWatch concept or two before, but this one is more minimalistic and chic than the rest. The render belongs to Stephen Olmstead and I sure hope he’s OK with me chopping up his canvas into 6 representations of the Apple watch. 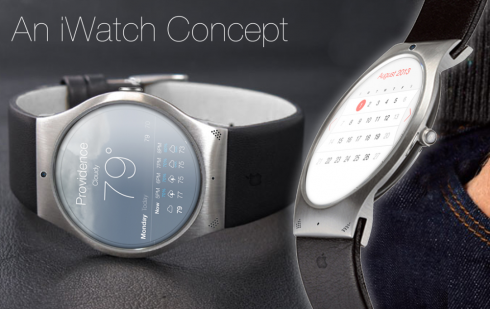 As you can see, the device is inspired by a watch that young Steve Jobs wore in the 80s. The iWatch comes with a camera lens embedded into the watch face and a low power E Ink watch face that’s always on, sort of like a display. It’s a clickable area that will initiative an app selector. If you click and hold Siri will start, so it’s a really smart setup.

There’s a button on the left with functionality assigned depending on the app and a button on the right also with functions assigned based on apps. We’ve got dual speaker grills for audio and voice calling and a microphone between them. The UI you see here is inspired by iOS 7 and the watch area shown on the screen is the Swiss Federal Railways one that Apple licensed.

This iWatch design is based on a modified Skagen Classic Leather wrist watch and the product is meant to be paired with an iOS host device via Bluetooth or adhoc network. Finally, the belt of the watch is made of polyurethane and it comes in a variety of colors. What do you think? I think this took a lot of work and inspiration.