Federico Ciccarese is famous for his Apple concepts and now he graces us with a brand new iPhone 6 render, shown below. This is a remake from a “test prototype description”, according to the designer, so he actually know something about a future iPhone. The next iPhone is shown here with a clear iPod Nano shape. 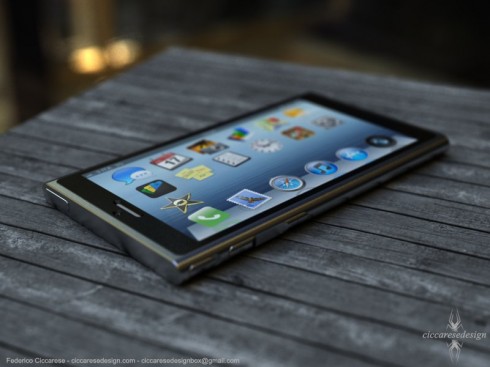 The device runs iOSX, a combo between iOS and OS X, which you can see in the video below. You will find the design of the phone a bit similar to the one of a Lumia device, but many people have said that the latest iPod Nano actually copies the Lumia, so who started? This iPhone 6 looks a bit more playful and oriented towards a landscape use, which is good, considering people have been asking for a while to be able to use the homescreen on the iPhone in landscape as well.

Just like on the iPhone 5, this model has a Lightning port and those tiny little speaker holes, now more discrete than ever. The edges of the phone seem all metal and there’s a general aspect of having a playful device on your hands. Also, where’s the Home button!? I supposed that gestures will replace it… This looks more like an iPhone Mini than an iPhone 6, to be honest.