Micromax Canvas 4 was already shown to us in concept phase by Suman Chatterjee, who decided to do a redesign of the device and the following image appeared. This handset uses Android with the Lotus UI on top and the Indian smartphone looks interesting now and has some strong specs. 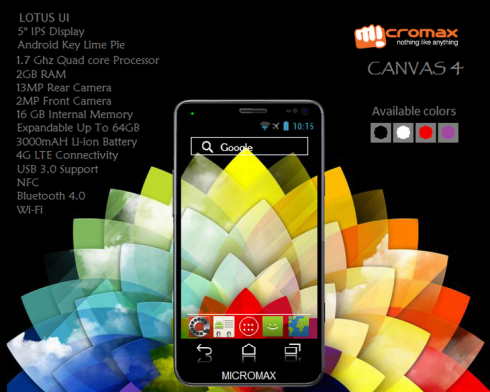 So, we’re dealing with a handset that’s available in black, white, red and purple and it features a 5 inch display, of the IPS kind and Android Key Lime Pie as the OS. Micromax Canvas 4 uses a 1.7 GHz quad core processor, 2 GB of RAM, a 13 megapixel rear camera, a 2 megapixel front camera, 16 GB of storage and microSD expansion for up to 64 GB extra. There’s also a Li-Ion 3000 mAh battery, 4G LTE connectivity and USB 3.0 support.

To that we add NFC, Bluetooth 4.0 and WiFi. The design of the device feels a bit low-end-ish and I guess that the price will reflect that. I expect something in the range of $300, if I can be allowed to speculate. A 13 megapixel camera for such a price on an Android smartphone is actually a bargain…