Jinesh Shah has rendered the famous HTC One 2 aka HTC M8 aka HTC Two in the following pictures, focusing more on the UI, than the device design. The result is a phone that runs Android 4.4 KitKat with HTC Sense 6.0 on top. 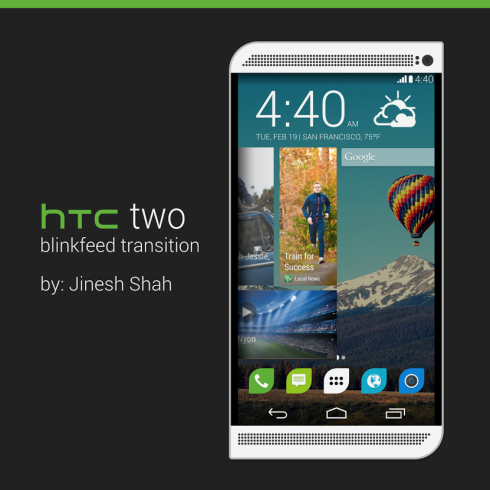 The handset has an unusual design, with a slight asymmetrical look going on. Its corner edges are turned in the opposite direction and the last time I’ve seen a design like this, its creator claimed it was easier to hold this way. HTC Two features proeminent dock icons below the BlinkFeed area and in the homescreen and lockscreen.

Those 5 dock icons make me think of MeeGo for some reason, but maybe it’s just me remembering that OS wrong. There’s also a new BlinkFeed transition and effects applied here, plus a new set of icons. The BoomSound speakers on the HTC One 2 look even bigger now and the device seems a bit wider.  The new HTC One is expected to debut at MWC 2014, with a Snapdragon 800 or 805 CPU, a 2K 5+ inch screen and 8 Ultrapixel camera.