Not long ago Sony released a Google Play version of its Xperia Z Ultra mega phablet, making us think of other similar releases in the future. Ben Ling was quick to imagine the concept below, the Sony Xperia Z1 Google Play Edition. 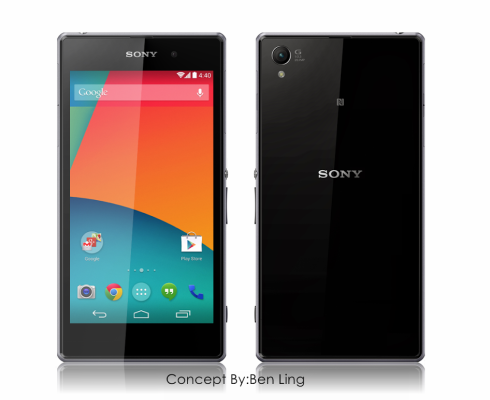 Just like the Z Ultra GE, this model drops the Xperia particle of the name and it only goes as the Sony Z1 Google Play Edition. It runs Android 4.4.2 KitKat, an OS that the original model would probably take forever to get. The specs are pretty much the same, including the water resilience, dust resilience and 20.7 megapixel camera with HDR video.

There’s a Snapdragon 800 processor on board, a 5 inch Full HD screen and a 3000 mAh battery. I can’t help but wonder if the Walkman player and all the cool tweaks have been left out as well, once stock Android was made available on the device. Most likely they’ve been removed, which may justify the removal of the Xperia name, too…

About Kelvin
Passionate about design, especially smartphones, gadgets and tablets. Blogging on this site since 2008 and discovering prototypes and trends before bigshot companies sometimes
Sony Revolutionary Transparent Smartphone Created by Branda World   HTC Two Rendered by Jinesh Shah, With Sense 6.0 and Android KitKat