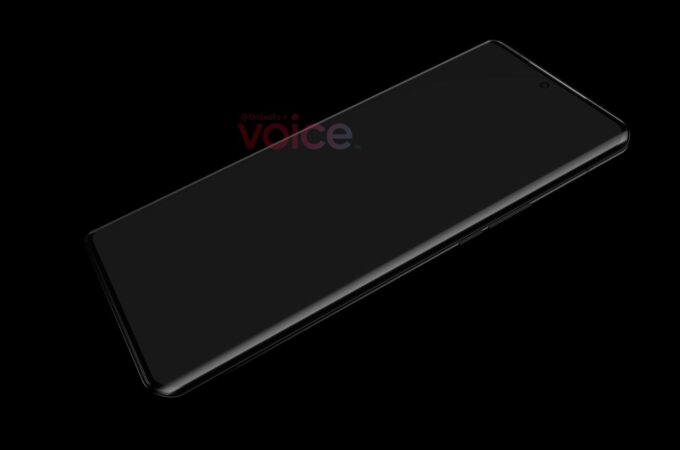 OnLeaks never sleeps, not even on the last day of 2020! Leakster extraordinaire shows us today the first render for the Huawei P50 Pro, or better said the first legit render. It’s more of a teaser to be honest, since it only shows outlines of the device and its front side. Let’s check it out below.

I went ahead and increased the brightness and contrast of the original image, looking for clues. The pic posted by Steve Hemmerstoffer/OnLeaks on Voice.com reveals that this time Huawei is going the Samsung way. This means that the pill shaped punch hole for the selfie camera is gone, replaced by a singular hole in the center of the device’s top side. The curved edges are here to stay and we have a minimal china t the bottom. We can also spot the Power button and volume buttons on the side, not replaced by virtual ones like we saw on Mate 30 Pro.

A slit appears at the top side, revealing we have a REAL earpiece this time and perhaps also stereo speakers. The Huawei P30 Pro and P40 Pro relied on vibrations coming out of the screen to generate sound and didn’t have a stereo setup. The source also reveals that he can only share limited data about the new Chinese flagship, but he can tell us that there’s a 6.6 inch display on board and a chassis that’s 159 mm long and 73 mm wide. Huawei P50 Pro is described as having “drastic side curves and thin bezels”.

We have yet to see the back side, but the vertical rectangular camera may also be due a change. I’m expecting maybe a rounded module, with Leica tech, 5X, 7X or even 10X optical zoom through a periscope camera and perhaps the big jump to a 108 MP sensor. Or maybe we get to see a new Sony 50 MP sensor as the core one. The CPU is most likely a Kirin 9000, that also powered the Mate 40 Pro and 8 or 12 GB of RAM should be inside. 120 Hz refresh rate wouldn’t surprise me.